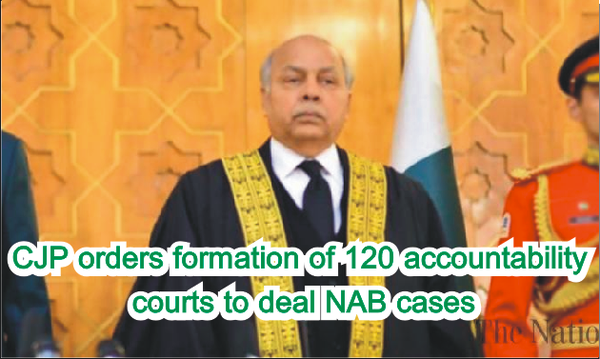 Chief Justice of Pakistan (CJP) Gulzar Ahmed ordered formation of 120 new accountability courts on Wednesday (ACs) for speedy disposal of pending corruption references within three months. The attorney general, prosecutor general, law secretary have been summoned for the next hearing, whereas suggestions have been sought from the National Accountability Bureau's chairman in this regard.

"If verdicts of NAB references are not finalised soon, the purpose of making NAB law would be lost," remarked the CJP. "NAB references have been pending since 2000. Why haven't they been decided? Is NAB not serious in enforcing its law?" Justice Ahmed questioned.The CJP further commented that NAB courts should be closed and its laws declared unconstitutional since references had been pending for 20 years.

"1,226 references are pending in NAB," the CJP stressed. "NAB references should be decided in 30 days, but it seems that it will take a century for these 1,226 references to be decided," observed the CJP. The anti-graft body is not functioning properly, said the CJP before ordering to appoint judges in fiveaccountability courts. "Strict action will be taken if the appointment is not made within a week," CJP Ahmed asserted.