Rasheed foresees a crackdown of NAB against looters 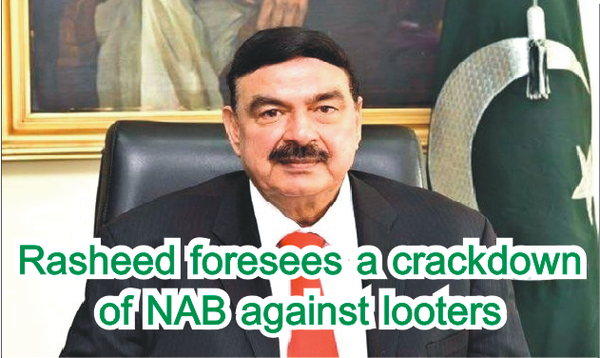 LAHORE - Minister Railways Sheikh Rasheed Ahmad said that the permission to resume trains operation be granted soon so that Pakistan Railways could address its financial crunch in the wake of coronavirus pandemic lockdown, besides facilitating the people who want to travel to their hometowns before Eid ul fitr. Addressing a news conference at PR headquarters on Saturday, he said Railways would have to refund Rs 232 million within 15 days to passengers, who got advance booking for May travel, if trains service were not resumed from Monday.

“If train operation was not allowed from Monday it will be difficult to follow the Standard Operating Procedures (SOPs) of lockdown and handle a large number of passengers later”, he feared. He assured that the Railways was ready to operate 15 Up and 15 Down trains from Karachi to Lahore, Multan, rest of Punjab and other provinces to facilitate the passengers.

He said that Jaffar Express train from Peshawar to Quetta would be operated with new Chinese coaches and its all four tracks had been changed which would be a “good news” for residents of Balochistan . He further assured that during train operation, only passengers would be allowed to enter in the premises of railway stations and all the railway officers had been informed in this regard. The minister said that 70,000 policemen were deployed at the railway stations to ensure implementation of the SOPs.

“I salute the railway workers who upgraded more than 10,000 passenger coaches during lockdown”, the minister said. However, he expressed his disappointment that although the provinces allowed road transport as well as air traffic but train, which were the most secure means of transport  “was not allowed to operate in which SOPs could be more effectively implemented”. He feared that if train operation was not allowed now, PR would not be able to operate trains in post eid scenario due to major financial constraints as the number of passengers normally went down after Eid .

While expressing his apprehensions, the minister said that if trains operation was not allowed then the federal government would have to bear the brunt and meet expenses of the railways, including Rs 3.2 billion of pension, and Rs 2 billion monthly salaries of the employees. He said railways had nothing in its account as revenue currently. To a question, Sh Rashid said that opposition was demanding amendments in National Accountability Bureau NAB Ordinance to protect their looted money. He said NAB was in the position to  conduct a widespread operation against the looters till July 31.

To another question, he said that Shehbaz Sharif was unable to enjoy his freedom, saying in a light vein that  virus ‘ lockdown’  might be a preparation of  ‘lockup’  for him. To a question related to ‘ahmedis, he said that during the tenure of Imran Khan no one could even dare  to think or imagine disrespect to our most venerable last Prophet (PBUH) and said hundreds of ministries could be sacrificed for such a sacred matter. He said that opposition of Imran Khan existed only in media and the government would complete its tenure of five years. “PPP and PML-N do not have the courage or power to face the government ,” he added. Sheikh Rashid ,to a question, opposed the amendments in the NAB ordinance and said that looters should not be given space to flee.