NAB not to pursue income, sales tax cases against businessmen 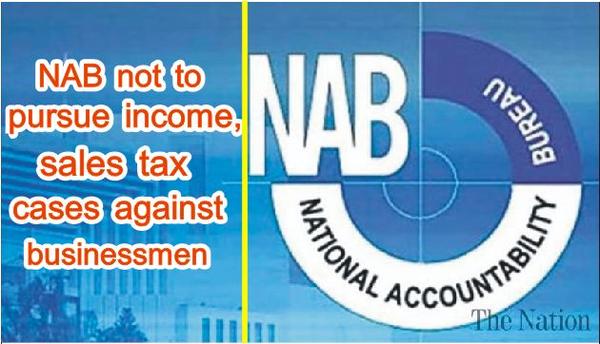 The National Accountability Bureau (NAB) will not pursue income and sales tax cases against businessmen, the anti-graft body has announced. In a press release posted on its website, the Bureau states that the business community and the bureaucracy have shown their complete confidence towards the body. “As NAB is a business friendly department and considers that business community the backbone of the development of Pakistan, that is why the chairman NAB has decided that in future the organisation will not initiate cases related to sales tax and income tax,” the statement read.

The NAB chairman, it further added, has assured the business community that the self-respect of every person will be ensured and ample opportunity will be provided to the bureaucracy and other people to prove their innocence. The press release also revealed that a memorandum of understanding has been inked between Pakistan and China to ensure transparency in the projects falling under the China-Pakistan Economic Corridor (CPEC).

Further hailing the Bureau’s performance, the statements added that from 2018 to 2019 the NAB has recovered Rs71 billion. “Today, more than 1,210 corruption references of NAB are under trial in accountability courts of the country. Chairman NAB has ordered filing of early hearing pleas in various accountability courts, so that Rs900 billion could be recovered from corrupt elements and deposited in the national exchequer.”

Commenting on the internal mechanism of the anti-corruption organisation, the NAB said it has prescribed a 10-months’ timeframe to conclude corruption cases, adding that it has also devised a grading mechanism to evaluate the annual performance of its employees.  “Positive results of grading system are already pouring in,” it said.