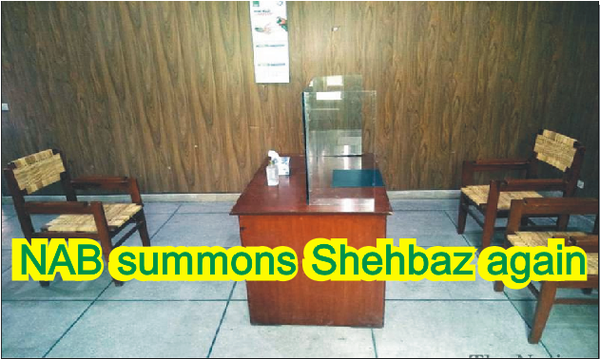 The sources said that NAB had been probing assets beyond means and alleged money laundering case against former Chief Minister (CM) Punjab, Mian Shahbaz Sharif on fast track and to bring the the case to logical conclusion the Bureau has called Mian shahbaz Sharif, in person, to record his statement. They said that as per standard operating procudure (SoP) of the Bureau, Mian Shahbaz Sharif had been provided with a detailed questionnare during his last show-up at NAB Lahore office. The sources clarified that Mr Sharif had been given sufficient time as per his will to collect all required details from abroad.

NAB officials said that NAB Lahore office had completed sufficient precautionary measures keeping in view the pandemic spread which included proper social distancing, provision of hand sanitizers, wearing of facial masks. They said that erection of glass wall on the centre table between combined investigation team (CIT) and Shehbaz Shrif’s chair had also been put in place, which would split the  CIT and the opposuition leader thoroughly into safe distance.

The officials also informed that all interview rooms were disinfected on daily basis so that all CITs and the appearing individuals might stay protected from any probable harmful infection during the investigation process.

The officials maintained that as per the directions from Chairman NAB, Justice Javed Iqbal all efforts were on the way to bring every mega corruption scandal to its logical end, so, the references might be filed in the Accountability Courts. They said that NAB has also clarified that the Bureau wouldn’t pay heed to any undue pressure, threat and propaganda while discharging its legal and constitutional duties, whereas, no delaying tactics adopted by anyone would be ascertained at all.

NAB is the prime and honoured anti-corruption body working with the mandate to eradicate corruption from society and recover looted money from corrupt elements and to submit the same into national kitty. NAB is all set for probing opposition leader, Shehbaz Sharif, as Lahore office has taken precautionary measures including social distancing, provision of hand sanitizers, wearing of facial masks and erection of glass wall.