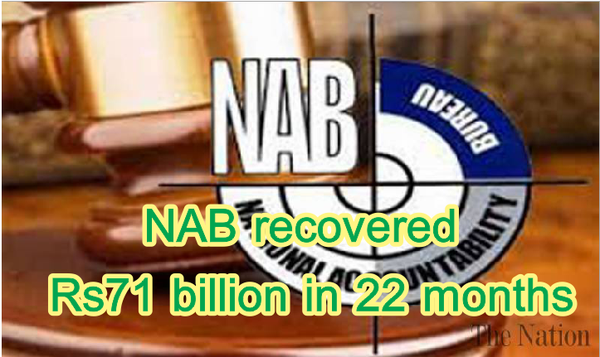 Due to hard work and management of the incumbent chairman, the NAB has emerged as an excellent anti-bribery institute which has already become a model institute due to trained manpower. New investigative officers would get training from Police College Sihala. The performance of investigation and research wing would further improve after the induction of trained officers, besides improving transparency and increasing professionalism. NAB has also introduced quality grading system for evaluating the annual performance of NAB officers. Under the system the officers were informed about the merits and demerits and directed to remove their shortcomings.

NAB has made an effective monitoring and evaluation system which improved overall working of the bureau. NAB has also set 10 months period for filing reference right from complaint verification to conducting inquiry. All process should be completed within 10 months period. The basic aim of transforming NAB in to a citizen-friendly institution was to inform the complainants about progress in resolving their complaints. This would help in creating transparency and responsibility, besides promoting both transparency and responsibility in the bureau. Investigation and Prosecution Divisions have been made more effective with the induction of new law officers. Due to training and value addition, the conviction ratio of NAB was 70 percent.

The bureau has filed 1219 corruption references having corruption volume of Rs 900 billion in various accountability courts. NAB has received 43,000 applications in Mudarba/ Musharka references. The NAB has so far apprehended 44 suspects besides recovering Rs 616 million, 6,000Kanal land,10 houses, 12 precious vehicles and 32 references have also been filed in different accountability courts so that the looted amount could be recovered from the suspects and returned to the affectees. NAB has also returned the amount to people by different housing societies.

Bureaucracy was the backbone of any country. It has most important role in progress and prosperity of any country. It has vital role in running governance system. Justice Javed Iqbal had addressed the bureaucracy in Islamabad, Lahore and Peshawar and frustrate the impression that bureaucracy has left workings. Justice had proved that bureaucracy has negligible ratio in corruption cases. Chairman had made clear that all were equal before the law and a suspect is innocent until proven guilty. NAB is a law abiding institution and firmly believes in resolving the issues as per law.