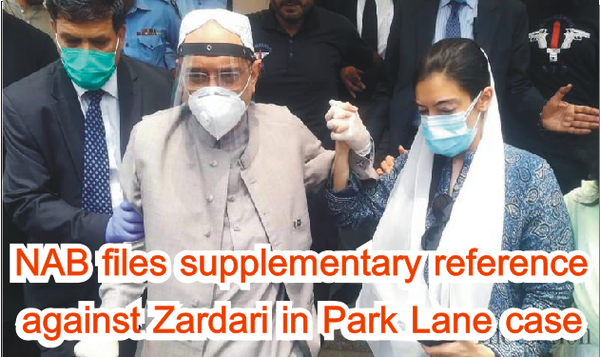 The National Accountability Bureau (NAB) on Tuesday filed a supplementary reference against former president Asif Ali Zardari and 19 other suspects in Park Lane case. In its reference, the anti-corruption watchdog has alleged that Zardari got a loan of Rs1.5 billion released for another of his front company and the money was later transferred for his personal use through fake bank accounts. According to NAB, Security and Exchange Commission of Pakistan (SECP) officials helped Pakistan Peoples Party (PPP) co-chairman Asif Ali Zardari in Park Lane agreements and obtained forged documents.

The anti-graft watchdog stated that loan was obtained on forged documents and later the company- Park Lane Estate Pvt Ltd refused to pay back a Rs15 million loan that eventually became Rs37.7 million due to interest. According to a reference, Asif Ali Zardari and his son Bilawal Bhutto have 25 percent shares each in the Park Lane company. Three more suspects have been included in the supplementary reference while more people have agreed to become approver against Zardari.