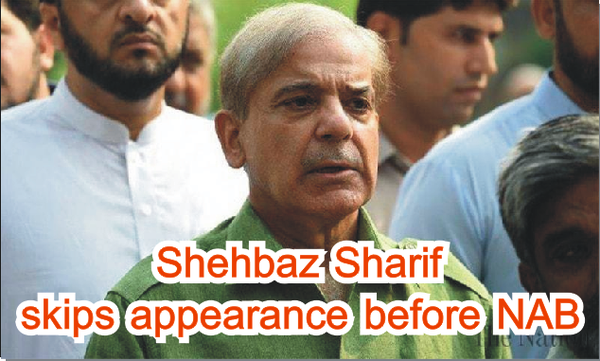 LAHORE - The President of Pakistan Muslim League-Nawaz (PML-N), Shehbaz Sharif has skipped National Accountability Bureau (NAB) appearance on Friday amid coronavirus outbreak. Shahbaz Sharif was asked to appear before the NAB in ongoing money laundering probe against him, however, he asked the National Accountability Bureau (NAB) to exempt him from personal appearances in assets beyond means case until coronavirus lockdown was over.

“I am a cancer survivor and aged 69,” he said while seeking the exemption citing his doctors’ recommendation who had advised him against any travelling during the pandemic. Shehbaz Sharif said that he should be given more time to submit his written replies and appear personally at the bureau. “NAB has already screened my assets several times,” he said adding that he had responded to all queries regarding his assets during his arrest at the hands of NAB previously. He also expressed his regret over NAB’s response to declare his replies to a NAB questionnaire as unsatisfactory. Other than Shehbaz, his sons Hamza Shehbaz and Suleman Shehbaz were also nominated in the money laundering case.

According to party’s spokesperson Attaullah Tarar, Sharif was a cancer survivor and his health did not permit him to appear before the corruption watchdog amid the current situation of coronavirus outbreak. In response to the summons, Tarar maintained that Sharif had submitted his written reply to NAB, adding that the opposition leader was earlier detained for 130 days out of which he spent 61 days under NAB custody where he was thoroughly interrogated.