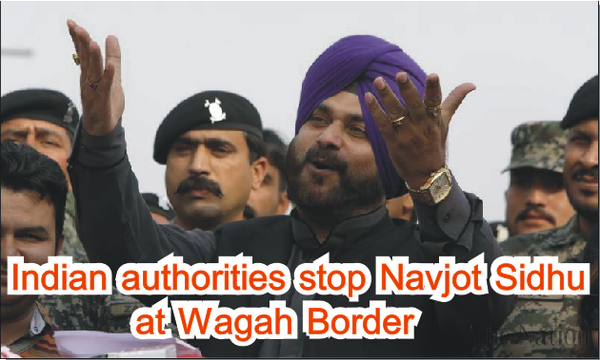 Despite giving the go-ahead to Indian cricketer turned politician Navjot Singh Sidhu, the Indian authorities on Saturday barred him from entering Pakistan through the Attari-Wagah border, sources said. According to sources, despite having a five-day visa the Indian authorities at Attari stopped the cricketer from entering Pakistan. Sources said that Sidhu will now enter Pakistan from Kartarpur.

On Friday, the BJP-Government had assured the Congress lawmaker that he will be allowed to travel to Pakistan from Wagah after he wrote his third letter to the Indian foreign ministry on Thursday requesting permission to visit Pakistan.

The Foreign Office had confirmed on Thursday that it had issued a visa to former Indian cricketer and politician Navjot Singh Sidhu for Kartarpur Corridor inauguration. "Pakistan has issued visa to Indian politician Navjot Singh Sidhu for his visit to holy shrine of Baba Guru Nanak," Foreign Office Spokesperson Dr Mohammad Faisal said during his weekly briefing.