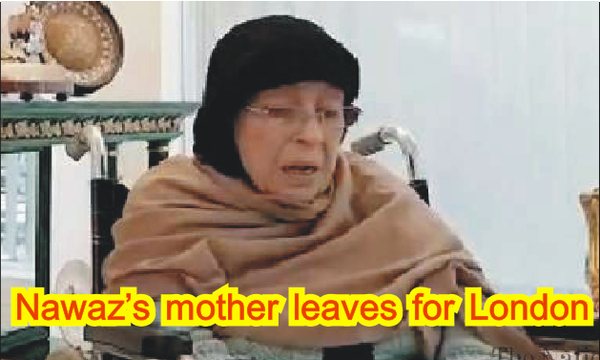 “Despite being advised not to travel, Shamim is travelling to London to see her son during his treatment,” PML-N spokesperson Marriyum Aurangzeb said in a tweet.  “Shamim Bibi had been advised not to travel because of her advanced age and illness but she expressed her wish to be there during her son’s treatment,” she said. As per the family sources, air travel of more than 90 years old and ailing Shamim Akhtar was a difficult decision that has been taken on her insistence to be with her son during complicated procedure. Nawaz Sharif is not ready to undergo any cardiac procedure till arrival of his daughter, Maryam Nawaz. Shamim Akhtar will try to convince Nawaz Sharif for immediate treatment as advised by medical experts.

As per the insiders, departure of Shamim Akhtar will be used to put pressure on the government to allow Maryam Nawaz to travel abroad to be with her ailing father. Recently, Shehbaz Sharif said that doctors desired immediate angiography of the ex-PM facing complicated cardiac ailment and other co-morbidities. He said that schedule was revised twice due to the absence of Maryam Nawaz. “The procedure required for Nawaz’s treatment had to be changed twice because his daughter Maryam, who wanted to be with her father at that time, was not allowed to come from Pakistan,” Shehbaz said in a tweet.

“Maryam should have been with Nawaz but she was not allowed to travel abroad to meet her ailing father,” he said in another tweet. Dr Adnan Khan had also raised alarm while suggesting early arrival of Maryum Nawaz to enable much needed treatment of the ex-PM. In a tweet, he said that the ex-PM was suffering from complex multi-vessel coronary artery disease and substantial ischemic and threatened myocardium for which he was due to undergo surgery. He stated that the treatment had been delayed twice because Nawaz’s daughter Maryam was not allowed to travel to be with him during the procedure.