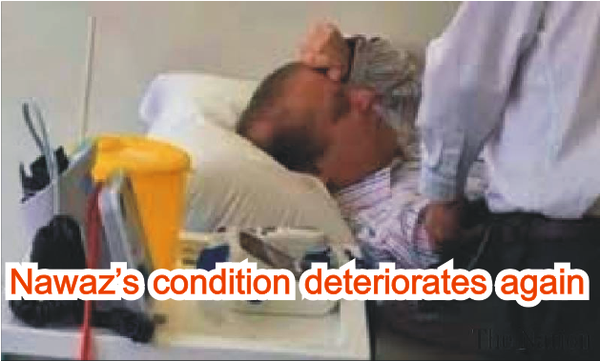 LAHORE - Health condition of former prime minister Nawaz Sharif deteriorated on Saturday with fall in platelet count and increase in blood sugar and creatinin levels.The modification in dose of steroids for improving other health indicators caused drop in platelets from 51,000 last day to 40,000 on Saturday. Blood sugar of Nawaz Sharif shot up to 230 in fasting on Saturday as against 150 the last day (Friday). Similarly, fluctuation of creatinin in the range of 1.4-2 could affect kidneys.

The Special Medical Board, headed by Services Institute of Medical Sciences (SIMS) Principal Professor Mehmood Ayyaz, examined Nawaz Sharif on Saturday, evaluated his existing reports and took fresh samples for further clinical assessment. For maintaining accuracy in platelet count, the board is carrying out tests of one sample from three different laboratories, Sir Agha Khan, Chughtai and the one at SIMS . Dr Adnan Khan, personal physician of ex-PM, also accompanied senior consultants in different specialties who expressed concerns over fluctuation of platelet count, high blood sugar and creatinin. Administering steroids is increasing platelet count but at the same time enhancing blood sugar level. Treatment of blood sugar and other co morbidities is leading to drop in platelet count. The board also allowed Nawaz Sharif to have a walk in the hospital corridors.

Services Hospital Medical Superintendent Dr Saleem Cheema said that the platelet count has increased but not to the satisfactory level and as such ex-PM was not medically fit. He said that the doctors allowed walk to assess his fitness level. Dr Adnan Khan took to Twitter to share updates on ex-PM’s health. He said that his (Nawaz’s) condition was critical. He stressed the need for early diagnosis of causes leading to drop in platelet count.

“Former PM NawazSharif remains critical. The treating doctors tried to reduce the steroids dose being given to him but unfortunately resulted in drop in platelet count again which has come down to 38*10^3/uL yesterday. The cause needs to be diagnosed & established without delay,” one of his tweets reads. “Severe existent co-morbidities (IHD, ECVD, DM, HTN, CKD3) has added to the seriousness of the nature of critical illness, where a very delicate balance has to be maintained between coagulation & anti-coagulation to sustain fragile unstable health status,” his second tweet reads.

INP adds: Pakistan Muslim League-Nawaz leader and former prime minister Nawaz Sharif’s daughter, Maryam Nawaz, who is under treatment in the Services Hospital, was advised PCT test which was declared normal on Saturday. The doctors had prescribed the PCT test to know bacterial infection. According to doctors, the PCT report was completely normal and she didn’t have any bacterial infection.