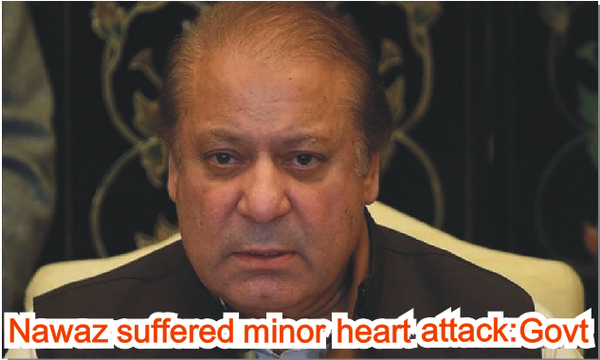 LAHORE/Islamabad - Former Prime Minister Nawaz Sharif suffered minor heart attack but fortunately it did not cause damage to his heart muscles, authorities said on Saturday. Though Nawaz continues facing complex health problem s, he is responding to the treatment and his platelets count had increased to 45,000, they added. In a related development, the Islamabad High Court Saturday granted the former prime minister interim bail until Tuesday on human rights grounds in Al-Azizia Steel Mills reference verdict. The court will resume hearing on Tuesday (Oct 29) of an appeal filed by his brother Shehbaz Sharif seeking remission of his punishment in that case on humanitarian and medical grounds.

On Friday, Nawaz was granted bail by Lahore High Court in Chaudhry Sugar Mills case, which is being probed by the National Accountability Bureau. Briefing media about the health condition of ex-PM, Health Minister Dr Yasmin Rashid said on Saturday that Nawaz Sharif experienced angina pain two days back. Blood platelets counts reach 45,000 and will hit normal level in a few days "Cardiologists conducted tests and provided him timely medication. Due to timely treatment, the echocardiography done the following day showed no signs of any damage to the heart," she said, adding, the ex-PM was given drugs for thinning of his blood. Yasmin said Nawaz Sharif was facing multiple problems but his condition was improving. She said that bone marrow of Nawaz Sharif was functioning normally while his blood pressure and sugar levels were also under control.

She said that blood platelets counts of the former premier had reached 45,000 and it was expected to reach normal level within next few days. The minister admitted that Nawaz’s condition could not be termed stable as he was suffering from diabetes, kidney complications, heart disease, cholesterol, joint pain and had already undergone a heart surgery and coronary stent procedures. “In addition to these complications, he is facing immune thrombocytopenic purpura (ITP). We are not doing politics on this issue and others should also avoid [doing so],” she urged. Dr Yasmin Rashid said that medical reports of Maryam Nawaz were normal. However, she said Maryam was worried due to health condition of her father.

To a query, she said the court would decide about the release of Nawaz Sharif. She added that Nawaz has expressed gratitude to the doctors providing him treatment. Speaking on the occasion, Dr Tahir Shamsi said that when Nawaz Sharif was brought to the hospital, his platelets count was critically low at 2,000 which has increased to 45,000. Hopefully, platelets count would reach normal level within a week or so, he added. The doctor said that ITP for which Nawaz has been diagnosed was a bleeding disorder in which the immune system destroys platelets. He said the treatment was given to the ex-PM in the light of his diagnosis.

Head of the Special Medical Board and Services Institute of Medical Sciences (SIMS) Principal Prof Mahmood Ayyaz said that platelets count was increasing due to regular administration of intravenous immunoglobulin (IVIg) injections. He said that Trop T and Trop I tests confirmed minor heart attack . He said the board has decided not to carryout angiography at the present stage due to low platelets count and other complications. The senior doctor said that the administration has stopped visitors from meeting the ex-PM due to his health condition. He said that only family members were entitled to meet him in the present circumstances.

Sharif family including Shamim Begum, the mother of Nawaz Sharif, visited the Services Hospital to inquire about his health. The PML-N workers have also set up a camp outside the health facility where prayers are being offered for early recovery of Nawaz Sharif. PML-N legislators are also visiting the camp.

During the course of proceeding, additional attorney general and NAB additional prosecutor general submitted that the federation and NAB had no objections over the bail on humanitarian grounds. The IHC chief justice remarked that it was the responsibility of Punjab government to implement the law related to prisoners. He said the Punjab government could itself grant bail against surety bonds to any prisoner whose life was at risk.

The bench observed that the prisoners of death sentence were also entitled to get bails on humanitarian grounds. Earlier, the bench sought reply from federation, NAB and Punjab government on the bail petition of Nawaz Sharif. The court directed the three respondents to tell the bench whether they oppose the plea or not. If the respondents took responsibility of Nawaz Sharif’s health and opposed the bail plea then the court would dismissed the petition, the chief justice remarked.

The chief justice said all the responsibility shouldn’t be shifted on shoulders of the court. If the three respondents opposed the petition then they had to submit affidavit for taking responsibility of Nawaz Sharif’s health. Additional Advocate General (AAG) Qasim Chohan submitted that the Punjab government was not able to oppose or support this petition so far. He adopted the stance that the federal government had no role in this matter. Interior Secretary said the federal government cannot take responsibility regarding the health of Nawaz Sharif. He prayed the court to decide the petition on merit.

Justice Kiyani said the state was responsible for protection of lives and property of all citizens of the country. Justice Minallah said this type of petition should have not come to this court as the provincial government has the powers to suspend the sentence of any prisoner on medical grounds.

Earlier, the petitioner’s lawyer pleaded before the bench that Nawaz Sharif’s health had deteriorated further since last day. He said the former prime minister had suffered a minor heart attack, adding his client’s life was at risk. A medical team of Services Hospital Lahore had informed the court on last hearing that a five-day treatment cycle of former prime minister would conclude on Monday and after that they would be able to submit a detailed medical report.