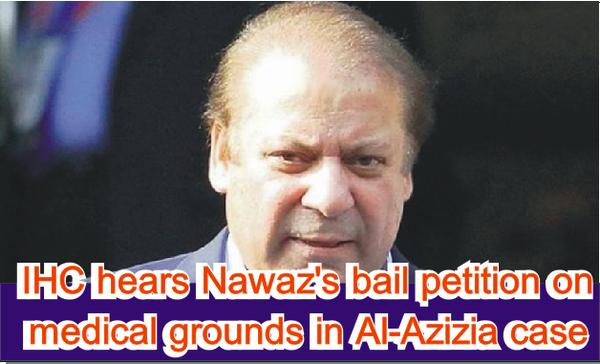 The Islamabad High Court (IHC) is set to hold an early hearing on a petition seeking the disposition of former prime minister Nawaz Sharif's sentence in the Al-Azizia reference. PML-N President Shehbaz Sharif had approached the court for an early hearing regarding the disposition of former premier Nawaz Sharif’s sentence today. The former Punjab chief minister has also attached the 11-member board’s special medical board’s report in his petition. In his plea, the PML-N president had stated that the hearing should be held today due to the former premier’s deteriorating health condition.

In view of the former prime minister’s health condition the IHC has scheduled to hear the petition today, suggest reports. The petition will be heard by a two-member divisional bench that includes IHC Chief Justice Athar Minallah and Justice Mohsin Akhtar Kayani. The court has excluded Justice Aamir Farooq as he is on a holiday. It is pertinent to mention that the Lahore High Court on Friday had approved the bail of former prime minister Nawaz Sharif in the Chaudhry Sugar Mills case. The bail was approved on medical grounds.