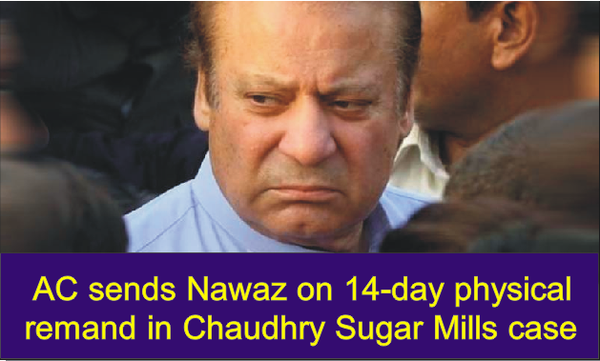 Former prime minister and Pakistan Muslim League-Nawaz (PML-N) supremo Nawaz Sharif was  was handed over to the National Accountability Bureau (NAB) on 14-day physical remand in the Chaudhry Sugar Mills case. Strict security measures have been put in place, with routes leading to the accountability court being closed ahead of the PML-N leader’s appearance. Speaking to media outside the accountability court before his appearance, Nawaz said he he fully supports JUI-F’s Azadi March. Nawaz said he appreciated Fazl’s spirit and fully supported him. “We consider Fazl’s position as our own and support it. If Maulana is protesting, then that is fine.”

The PML-N leader further said, “Maulana Fazl had suggested resignation right after the election. He had said suggested we protest, but we had convived him otherwise at the time. I believe we were wrong at that time.” During today’s hearing, the accountability watch-dog had requested for Nawaz’s physical remand.  Upon the appearance of Nawaz in court, the court was asked whether the former prime minister had been shown an arrest warrant at the time of his arrest, to which the investigation officer responded in the affirmative. The NAB prosecutor told the court that in 2016, Nawaz Sharif had the highest number of shares as a shareholder in Chauhdry Sugar Mills and Shamim Sugar Mills. The former was established in 1992.

The NAB prosecutor further told the court that in 1992, Nawaz was the owner of shares worth 43million. Maryam Nawaz, Shehbaz Sharif and others were shareholders. “Nawaz did not say how many shares he owned in 1992. He was provided with Rs15.5 million from a foreign company,” he told the court. A day earlier, NAB chairman issued arrest warrant for the PML-N leader.  NAB said, the accused committed money-laundering for purchasing shares in the Chaudhry Sugar Mills. Nawaz's daughter Maryam is also on judicial remand in the same jail in connection with Chaudhry Sugar Mills case. Nawaz's nephew Yousaf Abbas is at Camp Jail on judicial remand in the same case. NAB Lahore arrested Nawaz after taking permission from an accountability court to investigate him in the Kot Lakhpat jail.