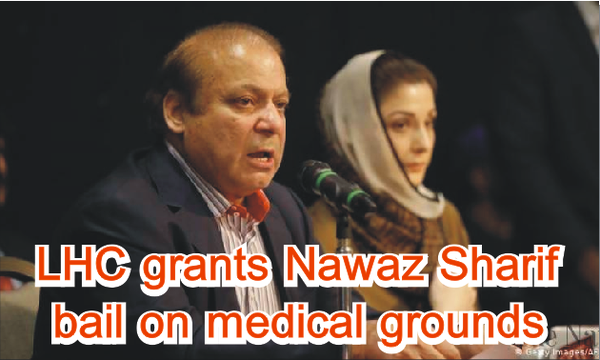 The Lahore High Court(LHC) has approved the bail of former premier Nawaz Sharif in the Chaudhry Sugar Mills case. Reports are currently saying that Sharif's bail has been granted on medical grounds.  Even the National Accountability Bureau (NAB) did not object when Shehbaz Sharif filed a bail plea today in the high court. Also read: Nawaz suffering from acute ITP, not bone cancer, reveal doctorsA two-member bench headed by Justice Ali Baqir announced the decision to grant Sharif bail. The court requires that the defendant deposit two surety bonds for Rs10 million each for the bail.

Shehbaz Sharif requested media viewers to pray for the health of his brother. The former chief minister of Punjab also added that he believed Maryam Nawaz should also be granted bail on these very grounds. The same statement was made by PML-N spokeswoman Marriyum Aurangzeb, and has been echoed by other PML-N leaders and supporters.

Dr Tahir Sultan Shamsi had confirmed that Nawaz Sharif did not have bone cancer, but rather acute idiopathic thrombocytopenic purpura (ITP).The disease, called ITP for short, is a disease that the doctor said was treatable in Pakistan.  PML-N leader Khawaja Asif said that opting for overseas treatment was a decision that Sharif will make himself, as according to Deputy Secretary Ataullah Tarar, the possibility of Sharif being taken abroad for treatment was also discussed in court. However, no final decision has yet been made.