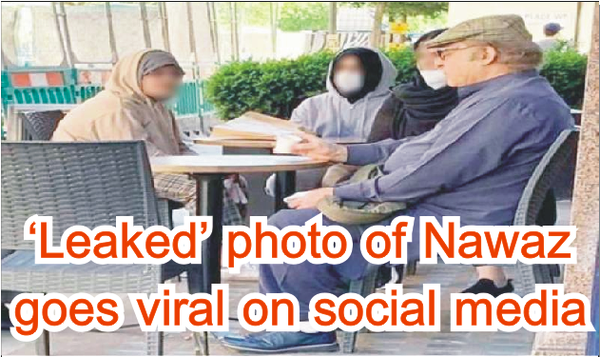 LAHORE - PML-N leader Maryam Nawaz, without naming anyone, alleged in a tweet message, “They even tried their best to kill Mian Saheb, but he was saved by Allah Almighty.” Maryam Nawaz, on Saturday, strongly reacted, on twitter, to the release of Nawaz Sharif’s photograph on social media, in which he can be seen enjoying coffee at a restaurant along with female members of his family. In a tweet response, Maryam said that the objective of releasing and making public that photograph on social media was to disgrace Nawaz Sharif, rather than publicising him, but this time too, the response was just contrary to what was intended.

She said that those who could attempt to forcibly barge into intensive care unit (ICU) to take snapshots of her ailing mother, it was not difficult for them to stealthily take photographs of Nawaz Sharif in a private family gathering with female members of the family. Terming it as an act of cowardice, she said that if it was such a virtuous thing to do then why that photograph was not taken openly.

Meanwhile, Prime Minister’s Special Assistant Dr. Shehbaz Gill reacting to the picture, in a social media statement said, “These people consider the nation as fool. He left for London with a false statement. The three-time prime minister lacks moral strength, they flee from the country on the basis of falsehood. Those people are pitiable who still hear their false utterances and consider them their leaders”, Gill said. It is to be mentioned here that his doctors had advised Nawaz Sharif to keep himself in isolation apprehending coronavirus infection to the former prime minister of Pakistan due to his advanced age.