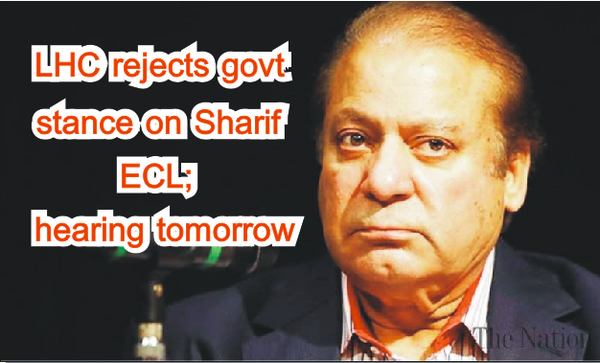 The Lahore High Court (LHC) bench on Friday accepted the plea on the removal of Nawaz Sharif from the Exit-Control List. The two-member bench, headed by Justice Ali Baqir Najafi and Justice Sardar Ahmad Naeem, dismissed the positions of the National Accountability Bureau (NAB) and the federal government, adjourning a court hearing until Saturday. The federal government had expressed concerns that the matter did not fall under the court's jurisdiction; the court, however, determined the matter did fall under its jurisdiction in its written verdict.

The federal government hopes that the court will uphold its position on seeking an indemnity bond from Sharif before he leaves for treatment overseas. In a 45-page reply to the plea, the federal government attempted to justify its case for trying to seek an additional bond from Sharif. The court however, expressed dissatisfaction as to the legal arguments presented by the government's lawyer, saying there was no known precedent of a government imposing conditions that the courts had not imposed.

Furthermore, the court also rejected the government's position that it was the administrative body that would be held responsible if Sharif did not return overseas. The bench held that it would instead be judicial authorities that would have to decide the legal course of action to take in that scenario, and not the government. On Saturday, it is believed that the court's hearing will revolve around whether the government has the authority to impose a condition that courts themselves have not imposed.