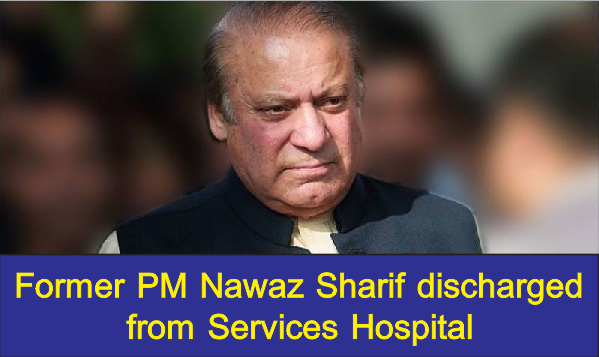 Former Prime Minister and Pakistan Muslim League-Nawaz (PML-N) supremo Nawaz Sharif on Wednesday has been discharged from Lahore’s Services Hospital where he was undergoing a medical treatment for 16 days due to fluctuation in his platelets count.According to details, the former premier walked towards the ambulance outside the hospital without any support. Sources told that he is likely to be shifted to Sharif Medical Complex for further medical treatment.

Meanwhile, PML-N spokesperson Marriyum Aurangzeb told that as per doctors’ advice, an intensive care unit (ICU) has been established at the residence of Nawaz Sharif for proper monitoring.On the occasion, stringent security measures were taken to avoid any untoward incident.The ecstatic PML-N workers welcomed their leader with rose petals and chanted slogans as he came out of the hospital.On October 21,Nawaz Sharif was rushed to the Services Hospital from Kot Lakhpat Jail after his platelets dropped to a dangerously low level with his doctors raising alarming concerns.

Dr Adnan Khan, a personal physician of Sharif, had informed Pakistan Tehreek-i-Insaf government about the deteriorating condition of ex-PM and urged to immediately shift him to the hospital for medical treatment.Later, incarcerated former PM was diagnosed with acute immune thrombocytopenic purpura (ITP), a disorder that leads to an abrupt and sharp drop in blood platelets, according to a medical board.Keeping in view the health condition of the former PM, Islamabad High Court (IHC), on October 30, had granted him bail for eight weeks over two surety bonds worth Rs2 million each.