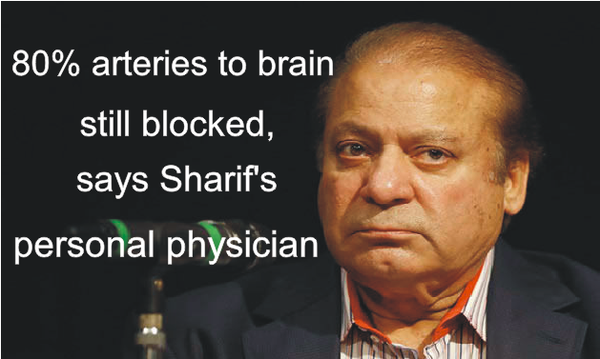 In London, Pakistan Muslim League-Nawaz (PML-N) President Shehbaz Sharif and Dr Adnan Khan, the personal physician of Nawaz Sharif, shared updates about the ailing Sharif's health on Friday. Shehbaz Sharif told media that his brother had been through the process of cardiac intervention seven times. "He was monitored by a doctor from Switzerland," said the younger Sharif. "Some tests will be conducted today and some tomorrow." According to Dr Khan, eighty percent of the arteries responsible for carrying Sharif's blood to the brain were still blocked. "Nawaz's medical appointments are booked," he said. "If the need arises, he will be taken to the hospital." Nawaz Sharif's name was removed from the Exit-Control List after a verdict from the Lahore High Court allowed the former premier, nullifying the conditions the federal cabinet had imposed for allowing Sharif to leave the country. The court however, made both the Sharif brothers sign an undertaking that they would commit to return to Pakistan as soon as Nawaz Sharif's health improved.