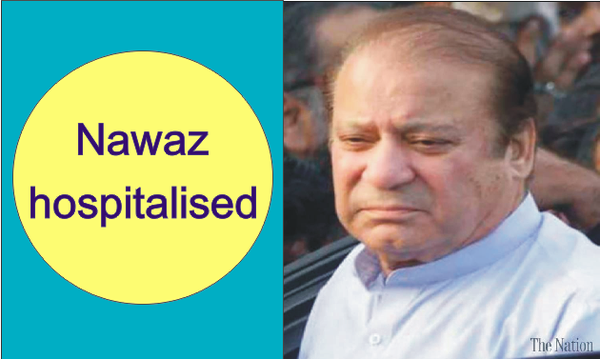 LAHORE    -   Former prime minister Nawaz Sharif was shifted to Services Hospital after his health deteriorated late Monday, private news channels reported. PML-N workers took to the National Accountability Bureau Office to protest against authorities accusing them of depriving the three-time premier of his right to healthcare facilities, the reports said. At the hospital, the 69-year-old was tested for dengue fever but the test returned negative. nEarlier in the day, Opposition Leader in National Assembly Shehbaz Sharif came down hard on the government for showing reluctance to shift his elder brother to a hospital.

“The government’s reluctance to shift PM Nawaz to hospital was the worst example of political vengeance and insensitivity. If anything happens to Nawaz, Prime Minister Imran Khan will be held responsible,” he warned. The personal physician of former prime minister also took to Twitter, calling for hospitalising Nawaz.

Meanwhile, police arrested Safdar, the son-in-law of Nawaz, on charges of delivering ‘provocative speech’ and hindering authorities in performance of their duties. Reportedly, an FIR had been launched against him under Section 124.