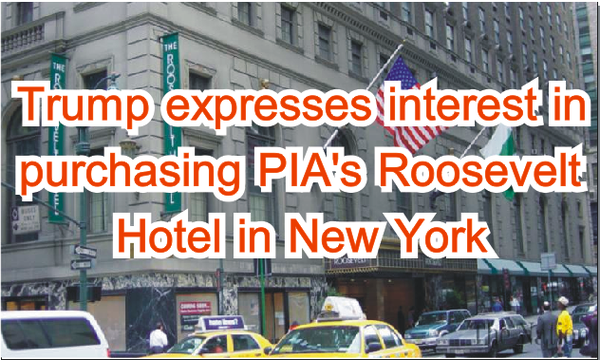 The United States President Donald Trump has expressed his interested in purchasing the Pakistan International Airlines' (PIA) Roosevelt Hotel in New York. The matter was revealed during a meeting of National Assembly's Standing Committee on Privatisation on Wednesday. MD PIA Investments informed that Trump has been keen regarding purchase the PIA-owned hotel in the past and has still expressed interest on purchasing it.

Briefing the members, Privatisation Minister Muhammad Mian Soomro stated the government was not adamant on selling the property but rather pursuing plan to lease it out or work in a joint venture with the private sector.

Khawaja Asif , PML-N leader and former federal minister, said that the parliament should be taken into confidence over the privatisation matter. Earlier, the opposition parties had opposed such decision when it was reported in the media earlier this month that the government is considering to sell the Roosevelt Hotel but no mention regarding US President's interest was done.