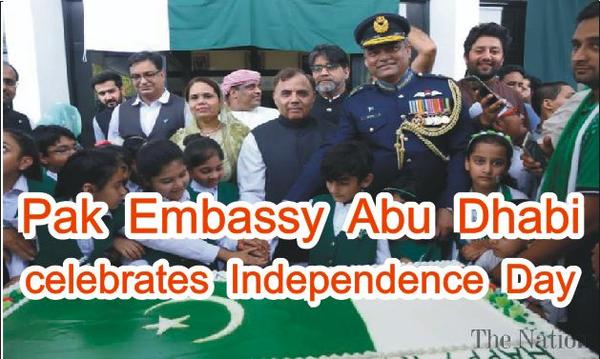 The 73rd Independence Day of Pakistan was celebrated at the Embassy of Pakistan, Abu Dhabi with national zeal and enthusiasm on Wednesday. A large number of UAE-based Pakistanis including women and children attended the ceremony.H.E. Ghulam Dastgir, Ambassador of Pakistan to the UAE, hoisted the national flag. Independence Day messages of the President Dr. Arif Alvi and Prime Minister Imran Khan were read out. In his address, Ambassador Ghulam Dastgir, while felicitating the Pakistanis on the auspicious occasion of Independence Day, recalled the great sacrifices rendered by our forefathers for the creation of a separate homeland. He also talked about the ideals which serve as the guiding principles for the nation’s march to peace and progress. The Ambassador said the day was being celebrated with the conviction that it would be a harbinger of political, economic and social stability. He said that it should also be considered as a day of introspection and to ponder over as to how we could re-direct our energies to the development of Pakistan to be able to stand tall among the comity of nations. Referring to the role of Pakistani community in UAE, the Ambassador appreciated their contribution in the development of UAE and the role they are playing in supporting the national economy and improving ties between Pakistan and the UAE. He particularly appreciated the UAE leadership‘s special affiliation towards Pakistan and said that the leaders of the two countries were keen on further strengthening bilateral relations. In line with the decision of the Government of Pakistan to stand with its Kashmiri brethren in wake of the recent announcement of Indian government to revoke Article 370 of its constitution, the Ambassador reaffirmed the Pakistan’s principles stance and expressed solidarity with the Kashmiri people for their legitimate right of self-determination. He called for a peaceful settlement of the Jammu and Kashmir dispute in accordance with the UN Security Council resolutions and aspirations of the Kashmiri people.  During the ceremony, children from Pakistani schools sang national songs with enthusiasm.