I will be ambassador for Kashmir issue around the world: PM Imran 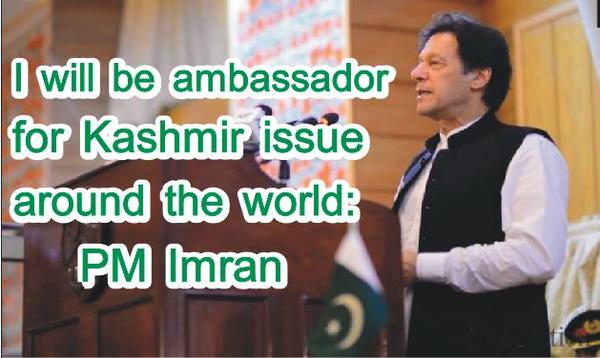 "I believe it is a [huge] strategic blunder by Modi. It will cost Modi and his BJP government heavily. I consider it a big miscalculation by Modi. He has played his final card," the premier said.  The prime minister noted that before the recent proceedings, it was a challenging task to draw attention of world leaders to the human rights violations in occupied Kashmir.  "But now, the Kashmir issue is under the spotlight of [world media]. By [clamping down further] on occupied Kashmir, Modi has in fact helped to internationalise the dispute."

"It is now up to Pakistan to highlight the issue. I will now be the ambassador for Kashmir issue around the world. I will take it up at every forum," the premier vowed, as he once again reaffirmed Pakistan's unwavering support for the Kashmir cause.  "We are facing up to a dangerous ideology: Modi’s RSS ideology. This ideology is grounded in hatred for Muslims, and it takes inspiration from Hitler’s ideology," the premier continued.  "First, we have to highlight this dangerous ideology of Modi to the rest of the world. It's a dangerous ideology and it has resulted in incidents like Babri mosque and 'beef' lynchings. What is going on in Modi's India is similar to what happened in Nazi Germany. Intellectuals in India are afraid to speak up because if they do, they are targeted.

"What is [India] up to? Why did they send in additional troops to occupied Kashmir? Why did they expel tourists from there? What are they doing?" he further questioned.  "Occupied Kashmir will only go towards freedom from here. Modi has dealt his final card, and it will cost him." Warning India against any violation, Prime Minister Imran Khan said the Pakistan armed forces are ready to respond to any misadventure.

The prime minister urged the United Nations to play its role in avoiding any further escalation in the conflict.  "If a war breaks out, I'm saying this to the UN, you’ll be responsible," he said, adding, "This is now UN’s trial. The entire Muslim world is looking at the UN [to play its role]."

The federal government earlier decided to observe Independence Day, on 14 August, in solidarity with the brave Kashmiris and their just struggle for their right of self-determination.