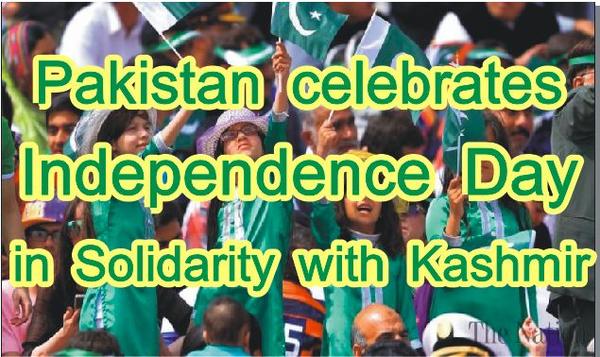 The nation is celebrating the Independence Day. today as 'Kashmir Solidarity Day' to reaffirm its full support to Kashmiris suffering atrocities at the hands of Indian troops in the Indian-occupied valley. The day dawned with special prayers in mosques across the country for peace, progress, and prosperity of Pakistan and the Muslim Ummah.

A 31-gun salute was offered in Islamabad, while a 21-gun salute was held in all the four provincial capitals, Gilgit and Muzaffarabad. The main flag-hoisting ceremony is under way at Convention Centre, Islamabad. President Dr Arif Alvi, the chief guest on the occasion, hoisted the flag.

The Pakistani government earlier announced to celebrate this Independence Day as 'Kashmir Solidarity Day' to express solidarity with the people of occupied Kashmir and to reiterate moral, political and diplomatic support to Kashmiris. The government also unveiled a special logo for the Independence Day reflecting the theme 'Kashmir Banega Pakistan'. Change of guards ceremony at Quaid's mausoleum

The change of guards ceremony was held at the mausoleum of the nation's founder Quaid-e-Azam Muhammad Ali Jinnah in Karachi earlier today.  A contingent of the cadets of Pakistan Naval Academy assumed the guards' duties. Commodore Irfan Taj of Pakistan Navy was the chief guest at the ceremony. He laid floral wreath at the mausoleum and offered fateha.