Firdous asks PPP not to do ‘politics’ on Kashmir 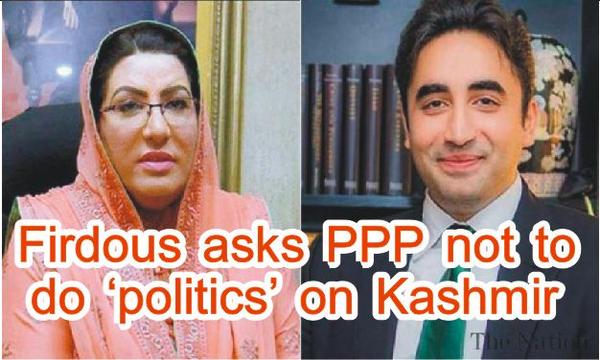 ISLAMABAD - Special Assistant to Prime Minister on Information and Broadcasting  (SAPM) Dr Firdous Ashiq Awan on Tuesday asked PPP Chairman Bilawal Bhutto Zardari not to link the corruption cases against him and his party men with Kashmir, which was a national issue.

“The Kashmir cause is the voice of 220 million Pakistanis. Therefore, Bilawal should not do politics on it,” she said in a video message while responding to a news conference addressed by PPP chairman earlier in the day. She said the whole nation was with the people of Indian occupied Kashmir (IoK), and Bilawal should not link the campaign he has launched for saving his ‘father and aunt’ with the noble cause of Kashmir.

The special assistant said that PPP should instead focus on improving governance in Sindh where flash floods were playing havoc with the lives of people.  “The city of Karachi, which is the country’s economic hub, has sunk in the rainwater due to the negligence of the provincial government,” she lamented.

Dr Firdous said that everybody knew the stories of corruption of Bilawal’s father, Asif Ali Zardari and other party leaders. She said at present the country was faced with two challenges; one on the Kashmir front and the other in fight against plunderers of national wealth. “And the government under the leadership of Imran Khan will succeed on both the fronts,” she expressed the optimism.

She reiterated there was no NRO (National Reconciliation Ordinance) for the corrupt elements. “The present government will not compromise on corruption cases at any cost as it was determined to take the looters to the task,” she said emphatically. The special assistant said Prime Minister Imran Khan and his government were fully committed to the people of IoK, struggling for their right to self-determination. “There would be no deviation from Pakistan’s principled stance on the issue,” she reaffirmed.

The prime minister, she said, had projected the Kashmir issue at international level and exposed the real face of India in a more effective manner, which, she claimed, was unprecedented. She said the world community had been apprised about the massive human rights violations being committed by brutal Indian forces in the IoK. Dr Firdous said China had supported Pakistan’s stance on the Kashmir issue, realising that it was based on principles and reality. She said Pakistan would always be at the forefront in the indigenous struggle of Kashmiris for achieving their legitimate right to self-determination. “India will never succeed in suppressing their freedom movement,” she added.