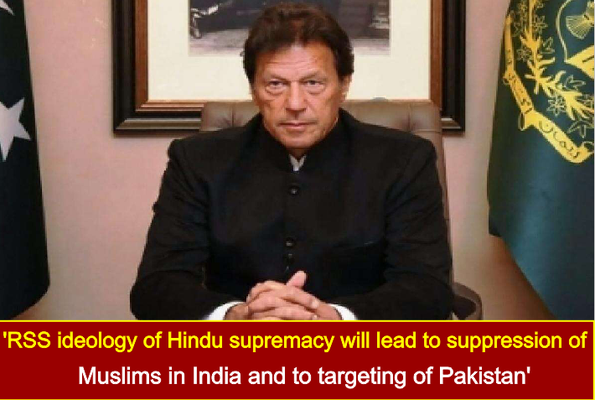 Prime Minister Imran Khan on Sunday said that the Indian government's policy in occupied Kashmir was in line with the "ideology" of the Hindu nationalist Rashtriya Swayamsevak Sangh (RSS) party — said to be a parent organisation of the ruling Bharatiya Janata Party (BJP) — that believed in "Hindu supremacy".
In a series of tweets, the premier said: "The curfew, crackdown and impending genocide of Kashmiris in Indian-occupied Kashmir is unfolding exactly according to RSS ideology [that is] inspired by Nazi ideology". He termed the RSS as the "Hindu supremacists version of Hitler's Lebensraum". Earlier this week, the Indian government stripped occupied Kashmir of its special status by repealing Article 370 of India's constitution. Kashmiri leaders were put under house arrest and a strict curfew was imposed in the occupied territory, that has entered its seventh day today. Though authorities claim that the curfew has been relaxed for Eidul Azha, occupied Kashmir remains cut off as phone and internet connections have been suspended and residents do not have access to television or radio.
Prime Minister Imran, in his tweets today, expressed concern that the "RSS ideology of Hindu supremacy, like the Nazi Aryan supremacy, will not stop in IoK; instead it will lead to suppression of Muslims in India and eventually lead to targeting Pakistan". He said that the BJP government is attempting to "change [the] demography of Kashmir through ethnic cleansing". "Question is: will the world watch and appease as they did Hitler at Munich?" he wondered. Prime Minister Imran had expressed similar apprehensions earlier this week during a joint session of the parliament, where he said: "What they (BJP) did in Kashmir is in accordance with their ideology. They have a racist ideology."

"They [Indian state forces] will now crack down even harder on the Kashmiri people. They will try to suppress the Kashmiri resistance with brute force. I fear that they may initiate ethnic cleansing in Kashmir to wipe out the local population. With an approach of this nature, incidents like Pulwama are bound to happen again. I can already predict this will happen," he had added. He had vowed to raise the matter on all international forums in order to find a peaceful resolution. Pakistan has already suspended diplomatic ties with India and has expelled its high commissioner and diplomatic staff.