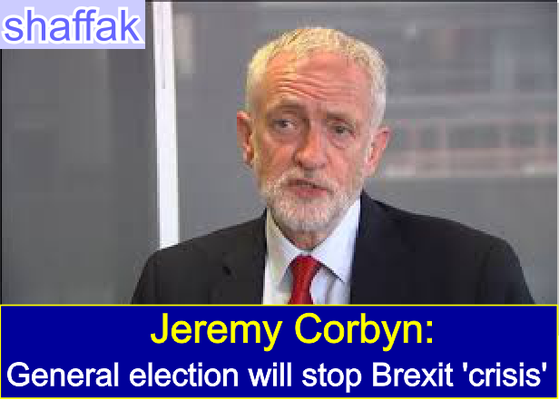 The Tory party has "failed" the UK and a general election is the "change of direction the country needs", Jeremy Corbyn has said.

The Labour leader said the UK is facing a Brexit "crisis" and vowed to do "everything necessary" to stop the UK leaving the EU without a deal.

It comes after a leaked government report warned of food and medicine shortages in a no-deal exit.

Speaking in Northamptonshire, Mr Corbyn said he supported recalling Parliament before MPs are due to return in two weeks' time so Brexit could be discussed.

He said this would prevent Prime Minister Boris Johnson "having some kind of manoeuvre to take us out on 31 October without any further discussion in Parliament".

Parliament could be reconvened if the government put a request in to the Speaker John Bercow.

Mr Gove, who is responsible for no-deal preparation, said the leaked cross-government study, codenamed Operation Yellowhammer, was old and that Brexit planning had accelerated since Boris Johnson became prime minister.

Speaking on Monday, Mr Johnson said no-deal preparations had been "very far advanced" ahead of the original 29 March Brexit deadline, but had since "slipped back a bit".

However he added he was "very confident" the UK will be ready to leave the EU by the end of October, with or without a withdrawal deal.

"I'm not pretending that there won't be bumps on the road […] but if everybody puts their minds to it, I have absolutely no doubt that we can get ready," he added.

A Downing Street source said the no-deal impact study leaked to the Sunday Times was presented at the first daily no-deal preparation meeting under Mr Johnson's government in July - but it was prepared by the previous administration.

A government source also told the BBC the no-deal study had been leaked by a disgruntled ex-minister in an attempt to influence discussions with EU leaders.

But Lord Kerslake, a former head of the civil service, said the dossier "lays bare the scale of the risks we are facing".

How could a general election be called?

Mr Johnson - whose government has a working majority in Parliament of one - has ruled out holding a general election before the 31 October Brexit deadline.

But Mr Corbyn plans to win a vote of no-confidence in the government, which would begin a crucial 14-day period, after which a general election could automatically be triggered.

To stop that automatic election taking place, the existing government, or an alternative one formed during that period, must persuade MPs to pass a vote of confidence.

Within the two weeks, Mr Corbyn wants to become a temporary PM, then delay Brexit and call a snap election.

There are no firm rules about who, if anyone, should get the chance to form an alternative government during the 14-day period.

Speaking after his speech, Mr Corbyn said the "constitutional precedent" was for the leader of the opposition to "take over" if a government collapses.

However Liberal Democrat leader Jo Swinson has suggested Mr Corbyn would fail to get MPs' support, and she would not support him becoming caretaker PM.

Reacting to Mr Corbyn's speech, the party's Brexit spokesman Tom Brake said Mr Corbyn should not be "prescriptive" when it comes to stopping a no-deal exit.

"It is clear Jeremy Corbyn cannot command a majority in the House.

"He must do the right thing and confirm that if he cannot, he will support someone who can," he said.

If Mr Johnson survives a vote of no-confidence, a general election appears unlikely before the UK leaves the EU.

What did Mr Corbyn say in his speech?

Mr Corbyn said the Tories have "lurched to the hard right under Boris Johnson", calling him "Britain's Trump".

"A general election triggered by the Tory Brexit crisis will be a crossroads for our country. It will be a once-in-a-generation chance for a real change of direction, potentially on the scale of 1945," he said.

"And if there is a general election this autumn, Labour would commit to holding a public vote, to give voters the final say, with credible options for both sides, including the option to remain."

What is the Conservatives' response?

"This is a cynical attempt to seize power by a man who would wreck the economy, is soft on crime and won't stand up for Britain," he said.

"Only Boris Johnson and the Conservatives can provide the leadership Britain needs and deliver Brexit by 31 October, whatever happens."

Mr Johnson is travelling to France and Germany to meet EU leaders later this week.

The prime minister will insist there must be a new Brexit deal when he holds talks with German Chancellor Angela Merkel and French President Emmanuel Macron.

What did the leaked no-deal document say?

The leaked dossier said leaving the EU without a deal could lead to:

UK patients having to wait longer for medicines, including insulin and flu vaccines

Passengers being delayed at EU airports, Eurotunnel and Dover

Freight disruption at ports lasting up to three months, caused by customs checks, before traffic flow improves to 50-70% of the current rate.

The fall-out from the Operation Yellowhammer leak presents an interesting conundrum for the government.

On the one hand it seems keen to distance itself from any suggestion that the worst-case scenarios presented are likely.

On the other it needs to be seen to be open about the possible impact of a no-deal Brexit, given the prime minister's insistence that the UK will leave the EU on 31 October come what may.

And while Mr Gove described the leaked dossier as an "old document", a government source confirmed it was presented at a ministerial planning meeting just three weeks ago.

What matters is whether the possible food shortages, disorder and travel disruption the leaked documents reveal are still considered possible worst-case scenarios.

And then, how far the "significant steps" taken by the government have mitigated the risk of each of those outcomes.

That may become clear in the coming weeks when the government begins a public information campaign telling people how to prepare for life outside the EU.