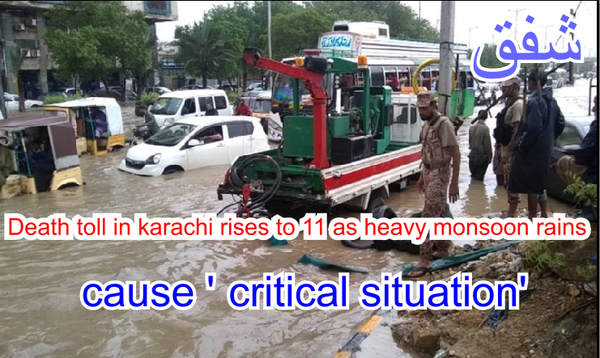 At least 11 people, including a child, lost their lives in rain-related incidents in Karachi, police said on Sunday as the megalopolis experienced heavy monsoon showers for a second consecutive day.

Nine people died of electrocution, while two were killed in roof collapses in Qasbah Colony and Bhatta Village, Edhi sources and the Superintendent Police Korangi told DawnNewsTV. Seven animals were also killed in various rain-related incidents, sources said.Karachi Mayor Wasim Akhtar, in a conversation with the media, criticised the provincial government and demanded that the city be declared "disaster-struck". He insisted that the metropolitan city needed proper infrastructure.Akhtar said that due to rainwater accumulated on the roads sacrificing animals in the streets will not be safe on Eidul Azha tomorrow. He added that citizens could use the KMC slaughterhouse to sacrifice animals.

The deluge caused an electricity breakdown in the Karachi Water and Sewerage Board's pumping stations, as a result of which the city could not be provided up to 250 million gallons of water.

Roads across the city are flooded with rainwater, while electricity supply is suspended in certain areas. A rescue operation conducted by the Rangers is currently underway.Meanwhile, Sindh Chief Minister Murad Ali Shah spoke to the Karachi commissioner and other officials, including local body and KWSB personnel, directing them to begin drainage of rainwater from the streets as soon as the rain stops.He also directed the Sindh Inspector General of Police Ghulam Nabi Memon to ask police to help people in the city, particularly residents of low-lying areas and informal settlements (katchi abadis).

'Critical situation'
K-Electric, in a tweet, said that the rainfall had created a "critical situation in Karachi" and urged the city administration to declare a state of emergency.In a series of tweets, the city's electricity provider said that low-lying areas such as Landhi, Ilyas Goth, Ibrahim Hyderi, Majid Colony Union Council 4, Shah Faisal, Malir Scheme 33, Rehri Goth and Korangi, which are prone to urban flooding, had been inundated with rainwater.

KE said that electricity supply to areas in a "state of urban flooding" had been suspended in the interest of public safety after it received reports of water accumulating around power installations and entering homes, posing a risk of electrocution.

K-Electric said that restoration efforts had also been hampered due to the challenging conditions and urged civic bodies to ensure drainage of water so that power could be restored.A number of cities across the country have received rainfall as a monsoon system from India draws closer to Pakistan.

At least six people were killed and 14 others injured in various districts as heavy rains lashed swathes of Khyber Pakhtunkhwa overnight on Saturday, according to the PDMA.

At least 50 heads of cattle and hundreds of chickens also died due to the rain.

Sindh flood warning
The Provincial Disaster Management Authority (PDMA) on Saturday flashed a flood warning in Sindh as the water level in key barrages continued rising, posing a danger to the lives of people and animals, as well as private and public property and infrastructure.

The water level in the Hub Dam rose by 2 feet on Sunday, reaching a total of 312 feet. According to Water and Power Development Authority (Wapda) sources, the water level may rise 8 feet more, reaching 320 feet. The maximum capacity of the dam is 339 feet.

According to the sources, enough water has been stored to provide the people of Karachi and Hub with water for a year.