Pakistan to take India to ICJ over Kashmir dispute 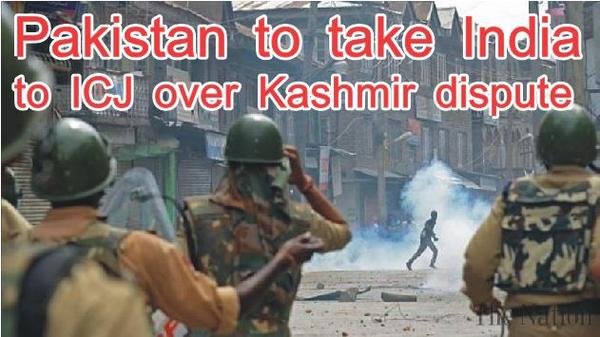 Pakistan on Tuesday decided to take the Kashmir dispute with India to International Court of Justice (ICJ), after New Delhi revoked special status to occupied Kashmir on August 5. According to sources, the foreign ministry has started preparations to call for a meeting of the human rights commission in Geneva next month and former foreign secretary Tehmina Janjua has been given the task.

On August 5, the Indian government had announced the scrapping of the special status of occupied Kashmir by revoking Article 370 of the Indian constitution. On Friday, Pakistan‘s Permanent Representative to the United Nations Dr Maleeha Lodhi said that the UN Security Council today discussed the deteriorating situation in occupied Kashmir in the wake of Indian move to change the status of the held territory.

Lodhi said the meeting was briefed on the latest developments and the dismal human rights situation in occupied Kashmir. Maleeha Lodhi said today‘s UNSC meeting has nullified Indian claims that Kashmir is their internal matter. Pakistani envoy said that voice of the  Kashmiri people was heard today at the UNSC meeting and it is just a first step.

While talking to the media after the meeting, she expressed that this was the first step for the people of Kashmir. She continued saying that  the SC meeting was convened at the request of the Pakistan which proved that Kashmir is a global matter.mThe United Nations Security Council held a rare meeting on Kashmir after India stripped the region of its autonomy, sparking a row with Pakistan, diplomats said.

The meeting took place behind closed doors, the diplomats said. It was extremely rare for the Security Council to discuss Kashmir, which has  been divided between India and Pakistan since independence from Britain in 1947.