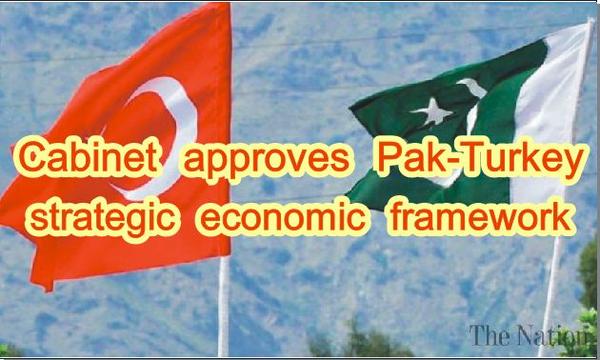 Federal Cabinet has approved Pak-Turkey Strategic Economic Framework to forge stronger cooperation between Islamabad and Istanbul. Special Assistant to Prime Minister on Information and Broadcasting Dr Firdous Ashiq Awan said this during a news briefing regarding cabinet decisions in Islamabad on Tuesday. The special assistant to PM said Prime Minister Imran Khan will head the high-level cooperation committee from Pakistan side while Turkish side will be headed by Turkish President Recep Tayyip Erdogan.

According to details, the framework has nine joint working groups that will be headed by Minister of Economic Affairs from Pakistan side. All sectors of the economy will be covered by joint working groups and 71 actionable items have been included in these. Dr Firdous said this framework will help connect Pakistan with central Asia, Russia and the West. Free Trade Agreement, technology Transfer, capacity building and defence cooperation are some important items of the framework.

The prime minister, during the meeting, told the cabinet members about the challenges faced by the government when it came to power. PM Khan said the economy that was on verge of default was revived and now it is in sustainable mode. The prime minister said the current account deficit has been brought down by 30 per cent and in one year it reduced from $19.8 billion to $13.5 billion

The Cabinet discussed measures to give confidence to businessmen and to ensure business friendly environment. It discussed the procedural challenges in the working of NAB that could deter businessmen on taking decisions. It also endorsed the decisions of committee on privatization in its last meeting. The meeting accorded approval of Rs5 billion to give interest-free loans to poor and homeless people.

Imran Khan also directed the cabinet members to ensure merit and transparency in the disbursing of loans. He said a mechanism and detailed strategy be made to launch the scheme across the country. Meanwhile, the cabinet also accorded approval in principle to Christian Marriage and Divorce Bill as per religious norms and following of the Christian community. Besides, an approval was given for bill against domestic violence and protection of women. The meeting also discussed salient challenges and achievements of the government during its first year.

Various ministers presented proposals and suggestions of public welfare being launched by their ministries.The country administrative head directed that the government's grievances cells and Pakistan Citizens Portal should work together and share information to avoid duplication.It also discussed measures to increase plantation in the country. It suggested to involving the youth in plantation of fruit trees. The cabinet directed the concerned ministry for provision of solar stoves in hilly areas where gas facility is not available.

Prime Minister Imran Khan apprised the cabinet in detail about his telephonic conversation with President Trump. The PM had informed President Trump that India plans to perpetrate genocide of Kashmiris to change the demographic composition of the occupied region. He urged President Trump that international community must play its role, constitute a fact finding mission and stop India from its brutalities in Kashmir. PM Khan emphasized that Kashmir is first line of defense for Pakistan. He emphasized that all elements, including media, should intensify their campaign on raising voice against the designs of Narendra Modi to annex Kashmir.