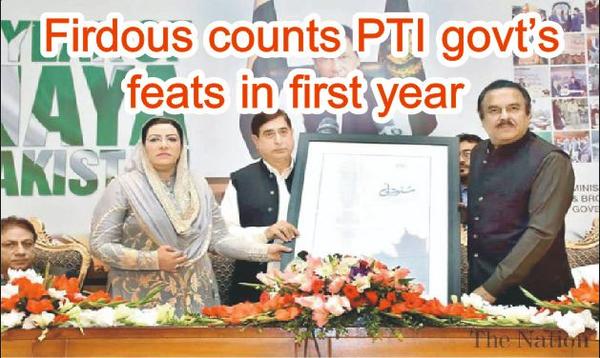 ISLAMABAD - Special Assistant to Prime Minister on Information and Broadcasting Dr Firdous Ashiq Awan has said that Pakistan Tehreek-i-Insaf government in a short period of one year has corrected the national course through hard work and honesty.

Addressing a ceremony held to mark the completion of one year of the government on Sunday, she said the government has introduced wide ranging reforms, improved performance of ministries, made institutions profitable and took far-reaching steps to financially help vulnerable sections of the society.

She said the Federal Board of Revenue (FBR) has undertaken reforms to increase revenue and broaden the tax base, and the Ministry of Energy considerably reduced the circular debt. Also, Pakistan Post and National Highway Authority (NHA) have been made profitable entities, while the visa regime has been relaxed for 175 countries to promote tourism in Pakistan.

Dr Firdous said in the New Pakistan, contrary to past practice, interest of the general public has a priority over the interests of the elite. This was why the Ministry of Housing was taking steps to provide low cost housing to the people, and the Ehsaas programme has been initiated to provide financial support to low income segments of the society.

She said Prime Minister Imran Khan achieved historic electoral success after a political struggle of 22 years. Terming Khan a soldier of Quaid-e-Azam, she said, he was striving to protect the interests of people and transform Pakistan into a welfare state on the model of Riasat-e-Madina where there would be rule of law, equality, opportunities for all, merit and a corruption-free society. She said under the PM’s vision, reforms are being introduced in all government ministries and institutions and the prime minister is personally supervising the reforms agenda of the government.

Firdous insisted that Prime Minister Imran Khan had not tried to curb the media at any level or at any forum, be it party level or government level.“The greatest achievement of the government in the past year is that we believe in the right of freedom of expression and speech.” “He (PM) did not direct for attacking or maligning the media... or taking away the media’s fundamental rights at any forum  or through any personal action.”

About the situation in Kashmir, Firdous Awan said the whole occupied valley was locked down by India and there was severe shortage of food, medicines and milk for children. India was suppressing the voice of Kashmiris by unleashing state terrorism in the held valley, she held. “We have dedicate this day to the oppressed people of Kashmir,” she said. Pakistan, she added, was incomplete without Kashmir and it was top priority of the government, reflecting sentiments and feelings of the people.

Prime Minister Imran Khan was making efforts for the freedom of people of Kashmir and the way the present government highlighted the Kashmir issue globally was unprecedented, she noted. She said the government was fully focused on Kashmir putting aside all other political considerations.

India failed to stop the UNSC’s meeting on Kashmir and now a focal group had been set up at the Ministry of Foreign Affairs to make effort for further open debate on Kashmir during the next session of the UN Security Council. She thanked the leadership of opposition parties for strengthening the national narrative on Kashmir.

She urged both the print and electronic media to collectively project the national narrative on the Kashmir issue for countering Indian propaganda. “Indian media has launched a negative propaganda campaign against Pakistan while projecting the fascist Narendra Modi as a national hero,” she pointed out. The Pakistani media must get united and counter the fake Indian narrative and highlight the Kashmir cause, she added.

The SAPM the government worked with dedication and sincerity, and put Pakistan on the right track with its policies. This was why noticeable improvements have also been made in Railways, Climate Change and many other government departments, she added.She said the government inherited Pakistan Railways in deficit and took measures to make it a profitable organization. Similarly, the PTI government inherited the circular debt of Rs1,200 billion, she said, adding the Ministry of Power took steps for improving electricity transmission and the overall system.

Firdous said the Ehsaas programme, which was close to the heart of the prime minister, was meant to create an equitable society. Some Rs 152 billion was allocated during the current year for it, which would be connected with other programmes like Sehat Card, interest free loans, internships for youth and schemes for the empowerment of women in rural areas.

She said a new tourism policy was formulated and practical steps were taken to make Pakistan a tourism friendly country. All bureaucratic hurdles in the ministries were removed to open doors of Pakistan for tourists. The SAPM said the Interior Ministry took steps to curb money laundering and smuggling at borders. The Ministry of Communications, she said, launched Road Safety Programme to ensure security for the people travelling on highways.

She said keeping in view the wishes of the business community, the Federal Board of Revenue had been revamped and made autonomous. The prime minister, she said, initiated Kamiyab Noujawan programme for the youth, who were 65 percent of the population. The programme was critical for the women as 25 percent of the loans were allocated for them, she added.

Dr Firdous said the Foreign Affairs Ministry in its successful role countered all the conspiracies of India and after five decades the Kashmir issue was taken up at the forum of United Nations Security Council. She said historic reforms were initiated in Madaris (religious seminaries) under the National Action Plan. The PTI government showed courage on the issue unlike the previous regimes.

She said the links between Associated Press of Pakistan are being increased with international news agencies so that it projects positive image of Pakistan abroad. She said the information ministry was empowered according to the requirements of the present age. Steps were taken for capacity building of departments working under the ministry.

The special assistant said the government believed in complete freedom of media, which was ears and eyes of the people who came to know about the state agenda through it. The government had always welcomed positive criticism from the media and protected its rights, she added.

She said the government would continue to inform the public about its steps for reforms and their welfare through the media. She said the ministry has established the Commission on Right of Access to Information, and a Social Media Wing had been set up in the ministry to connect with the electronic and print media for disseminating news to the public.

She said the prime minister had directed for clearance of dues of media houses on account of advertisements. All the pending liabilities of media houses would be cleared in coming months. A new advertisement policy, she said, would be announced and affairs of the advertisement section of Press Information Department would be streamlined to the satisfaction of media owners. The Central Media List of PID would be made transparent.

An interim wage board for journalists was announced and soon permanent award would be announced, Dr Firdous said. Also, she said, her ministry has allocated and cleared liabilities of Rs1.5 billion to address longstanding issue of pensioners’ payments in PBC and APP. The External Publicity Wing of PID would be improved and this year foreign journalists would be facilitated to promote feel good factor about Pakistan, the SAPM said.

Speaking on the occasion, Special Assistant Naeem ul Haq said Pakistan is passing through a turning point in history in the backdrop of Kashmir situation. He said whole nation is united over protesting the unilateral and illegal act of India. The Special Assistant assured that government will take every step to help Kashmiris achieve their aim of liberation. Referring to domestic situation, he said when the government assumed power the economic situation was critical. He said the government received an empty treasury and was not even in a position to run its day to day affairs.

Naeem ul Haq said Pakistan sought friendly countries’ help as well as taking austerity measures and a number of steps to ameliorate the economic situation. He said the government also launched big projects like provision of housing for people of lower income backgrounds. He said development budget has been enhanced from 500 billion rupees to 900 billion rupees. The Special Assistant said 114 schemes have been started under Ehsaas program to help poor people stand on their own feet.