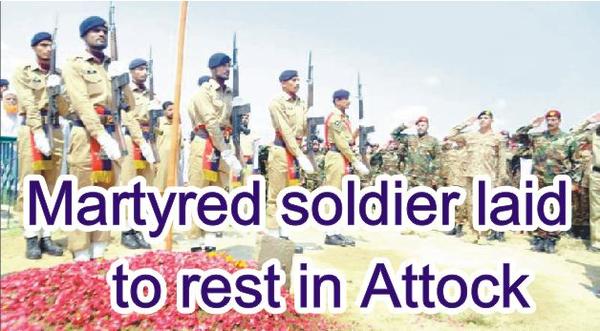 ATTOCK - Naib Subedar Ahmad Khan Awan, who had embraced martyrdom in Kashmir Kel Sector the other day, was laid to rest in his native graveyard in Dhok Akbari of Attock district, 24 km away from here with full military honour on Sunday. A smarlty dressed army contingent, presented general salute to the martyr. Floral wreaths on behalf of Chief of Army Staff, Joint Chief of Staff Committee  and others were laid on his grave by Brig Muhammad Tariq Jan. The martyr has left behind his bereaved his, wife, three sons and two daughters.