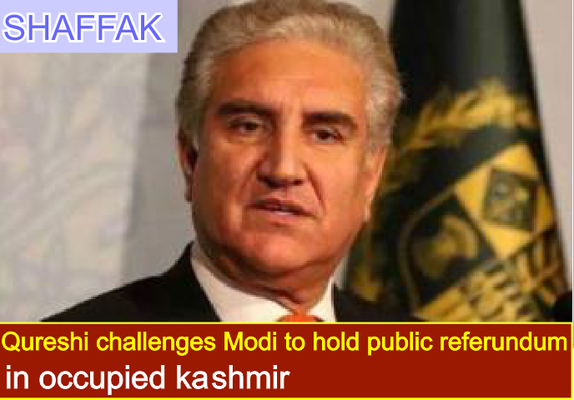 Foreign Minister Shah Mahmood Qureshi on Sunday challenged Indian Prime Minister Narendra Modi to hold a public referendum in occupied Kashmir "if he really wants feedback on the popularity of his decision" to scrap it of its autonomous status. "I challenge Narendra Modi to lift the curfew and call the entire Kashmiri leadership — including those who have been in government with you — such as Mehbooba Mufti, a former chief minister, Omar Abdullah, also a CM, and the Hurriyat leadership Mirwaiz Omar Farooq, Ali Gilani, Yasin Malik — there are numerous individuals," said Qureshi, during a press conference in Multan.

"In Srinagar, or wherever you see fit, hold a public referendum today," he said, daring Modi to test which way the public opinion sways."You haven't fulfilled the United Nations promise but today if you wish to check the popularity of your decision, hold the referendum and all will be crystal clear," said the foreign minister. Restrictions are continuing in much of occupied Kashmir, which entered the 13th day of an unprecedented lockdown on Sunday. India’s government claims it’s gradually restoring phone lines. Soldiers on Sunday still manned nearly deserted streets and limited movement of the few pedestrians who came out of their homes in Srinagar. Qureshi, in his media briefing, said that the United Nation's Secretary-General had said they consider the area to be a disputed region and that the solution to the dispute lies in the UN resolutions, UN charter and in accordance with international laws.

"This is a major diplomatic success for Pakistan," said the foreign minister, however, questioning the international community's insistence that talks between India and Pakistan be held. "They say we should move forward and hold bilateral talks. I say, Pakistan was never opposed to a bilateral dialogue.

"There are three parties to the dispute: India, Pakistan and Kashmiris. Two parties are completely uninvolved in your [United Nations Security Council] decisions, and the third, Kashmiris, are under arrest and a curfew has been imposed on them. "They can scarcely breathe, we don't know if they have access to medicines, or food, even. In which environment are they asking that we hold talks?" said Qureshi.