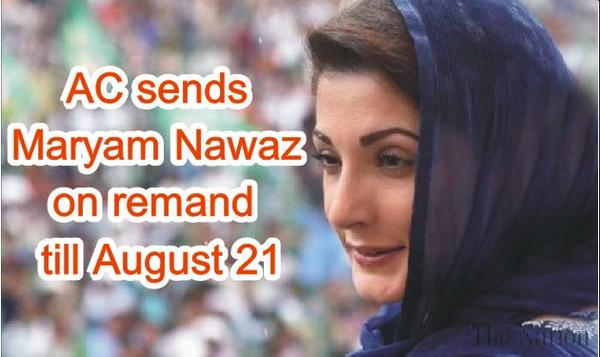 Pakistan Muslim League-Nawaz (PML-N) Vice President Maryam Nawaz Sharif, who was arrested by National Accountability Bureau (NAB) on Thursday, was remanded into NAB's custody till August 21.  Maryam had appeared before an accountability court today in connection with the Chaudhry Sugar Mills case.

Yousaf Abbas, a cousin of Maryam Nawaz who was also arrested by NAB the same day, was produced before the court alongside the PML-N leader and was also reminded into the accountability watchdog's custody for 12 days.  NAB had sought a 15-day physical remand for the two.

PML-N leader Hamza Shehbaz, the son of opposition leader Shehbaz Sharif, was also present in the court in relation to the Ramzan Sugar Mills case.

A scuffle broke out between PML-N workers, who had gathered outside the court premises and police personnel as Maryam Nawaz was escorted to the hearing earlier today.Enraged PML-N workers were seen pelting stones at the police, with at least one policeman reportedly injured in the ensuing ch