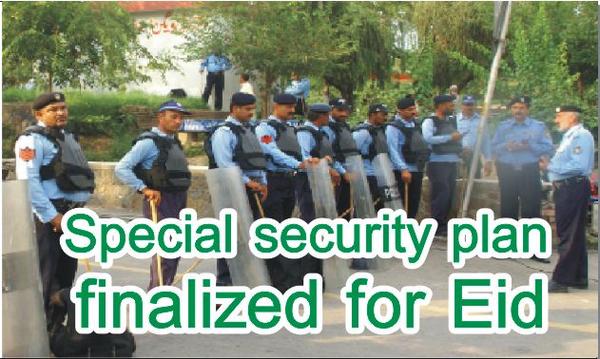 Islamabad Capital Territory (ICT) Police have finalized a comprehensive security plan for the eve of Eid-ul-Azha and decided to augment security at public places, worship places and other important buildings to thwart any untoward incident.

According to Islamabad police, Inspector General of Police (IGP) Muhammad Aamir Zulfiqar has directed the police to remain on high alert and fully prepared to avert any untoward situation during Eid days. The security plan was finalized in a meeting chaired by IGP Islamabad and also attended by DIG (Security) Waqar Ahmed Chohan, DIG (Operations) Waqar Uddin Syed, DIG (Headquarters) Muhammad Saleem, AIG (Special Branch) and SSPs of all divisions.

According to the security plan , policemen would patrol various sectors to check possible house burglaries during Eid holidays. More than 975 Masajids and 33 Imambargahs will be covered by armed guards and policemen during Eid ul Azha prayers.  Walkthrough gates would be installed for checking purpose while police officials would be also deputed at bus stands to address the complaints of passengers if any and take action against those transporters charging high fares.

The policemen would also patrol in the various sectors and police in charges of circles would ensure proper security at the Eid congregations in various locations. "Sub Divisional Police Officers and Station House Officers would be responsible of the security around worship places. They may be provided additional force on their request for the effective patrolling and security at Eid congregations in various sectors," he maintained.

Duty rosters have been prepared by the in charges of police stations and policemen would patrol in various sectors during day and night timings to check house burglaries and ensure protection to properties during Eid holidays. The mobile officers and police guard posted at Mosques, Imambargahs, public/picnic places will take notice of the beggars hovering around the premises and will take legal action against them.

Special focus is to ensure safety to properties and stop frequent incidents of theft and car lifting during Eid holidays. As a part of security measures, police pickets would be erected at all important entry and exit points for checking of vehicles. All police officials have been direction to ensure implementation on section 144 imposed by the District Administration and strict check to be maintained against one-wheelers and those involved in stunts on roads.

The mobile patrols and squads of Islamabad Traffic Police would also remain present in markets, shopping plazas and also at prominent points during Eid congregations.  Bomb disposal squad will remain available at short notice and all public places, parks, playgrounds will be kept under strict vigilance and security cover.

Islamabad Traffic Police (ITP) has also been directed to make a special deployment plan and markets, as well as shopping areas, will be manned by traffic officials to regulate the traffic and ensure planned parking. Traffic deployment in shopping areas, markets will be augmented while the patrol cars and pairs will patrol in their respective areas to facilitate the general public.