Predictions about Imran from 1996 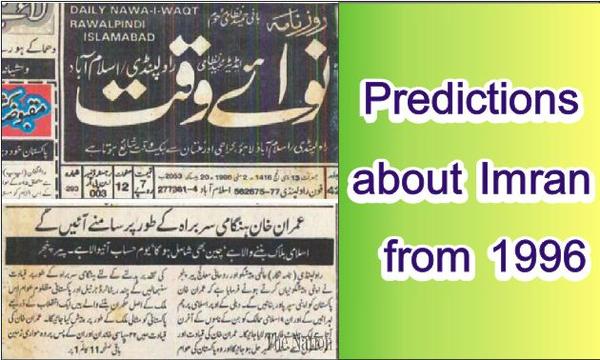 Lahore - Believe it or not, and as incredible as it might be, but some people in the human history appear to have such intelligence as seems to be transcending the space-time barriers. Such persons, often claiming access to the spiritual realms, have made some very accurate predictions about global events even centuries before they actually happened. Nimatullah Shah Wali and Baba Vanga are two such world famous names.

Another such personality, Pir Punjal, a Pakistani spiritual figure, is also known for making highly precise predictions about national and global events. Pir Sahib made some predictions more than two decades ago, some of which have already come true while things seems to be moving in the direction of fulfilling his other prophesies.

One of his hard to believe prediction, which has already proved true, was about Imran Khan. At a time when no one took the cricketer-turned politician seriously, Pir Punjal predicted his eventual rise to power. Here are some other interesting foresights of Pir Sahib which are relevant to the present and near future, and which were published in Nawa-i-Waqt (Urdu newspaper) in 1996.

Pir Punjal predicted the resolution of Kashmir issue, as a result of the efforts of Imran Khan and under his leadership. He also predicted that Imran Khan would bring nine Muslim countries on a single platform. He said India would be conquered by Muslim forces and Islamic flags would be waved in Delhi.

According to yet another prediction, the oppressed people of Pakistan would gain power as the result of a revolution led and assisted by some retired army officers. And, the country would be presented as model state. The corrupt bureaucrats and politicians would be held accountable.

One-party system would be introduced through a new way of elections and the office of prime minister would be eliminated. The people, especially politicians of the country, would face a very difficult situation. Elaborating on his prediction about the Islamic bloc, he said things were gearing up towards the establishment of a big Islamic block consisting of countries having alphabet “N” at the end of their names. He even named most of these countries: Pakistan, Afghanistan, Iran, Uzbekistan, Kyrgyzstan, Tajikistan and Turkmanistan.

According to the spiritual leader, China will also join the coalition of these Muslim countries. Imran Khan will play a key role in formation of this coalition and also lead, since he has alphabet “N” in his name. Interestingly, several newspapers of Pakistan has published some predictions on 28th January, 1991. Those included cricketer Imran Khan’s joining politics in near future, and joining of his party by many renowned personalities.