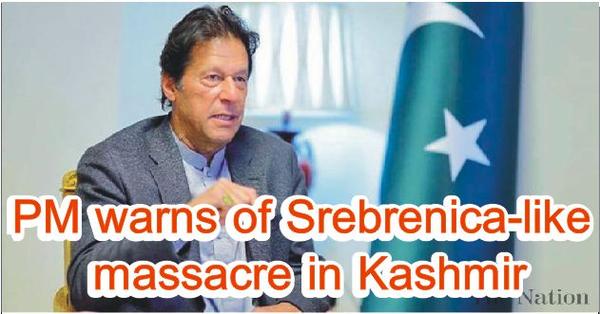 ISLAMABAD - Prime Minister Imran Khan on Thursday warned international community of severe repercussions and reaction if it silently witnessed another Srebrenica-type massacre (mass killing of Muslims during the Bosnia war) and ethnic cleansing of Muslims in occupied valley.

“Will the world silently witness another Srebrenica-type massacre and ethnic cleansing of Muslims in IoK?,” Imran Khan asked in a series of tweets and warned that India’s brutalities in the occupied valley would further radicalise the Muslim world and set off cycles of violence.

The prime minister added “I want to warn international community if it allows this to happen, it will have severe repercussions and reactions in the Muslim world setting off radicalisation and cycles of violence.” The prime minister’s tweets come as the curfew and communication blackout entered its 12th day in the occupied valley.

The Indian authorities have been maintaining a strict clampdown in the valley since August 5, after the Bharatiya Janata Party-led Hindu nationalist government abolished the Indian constitution’s Article 370, which granted special status to occupied Kashmir.

The tensions mounted in the disputed valley with unprecedented numbers of Indian troops deployed in the region. Television, telephone and internet links have been suspended and the occupied territory remains cut off from the external world due to the communication blackout.

Monitoring Desk adds: India’s Prime Minister Narendra Modi defended his controversial decision to strip the Indian part of the disputed region of Kashmir of its semi-autonomous status during a speech Thursday marking the country’s independence which was observed as Black Day in neighbouring Pakistan.

In a speech delivered from New Delhi’s historic Red Fort, Modi said the “old arrangement” in Jammu, Kashmir and Ladakh “encouraged corruption and nepotism,” while creating an unjust environment for women, children and tribal communities. But the law also allows non-residents from elsewhere in India to buy property in Kashmir.