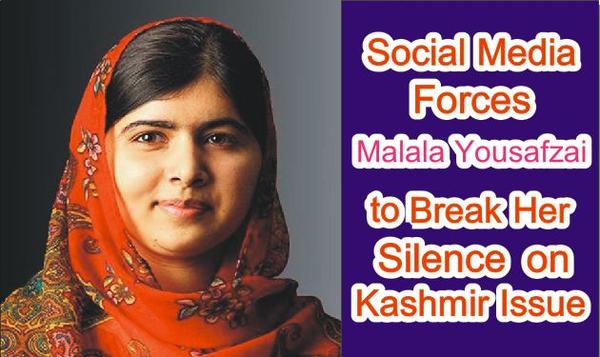 After plenty of criticism from Pakistanis, Nobel Peace Laureate, Malala Yousafzai has finally broken her silence over the Kashmir issue.

Malala’s silence was a heated topic on social media considering the fact that she is quite vocal about human rights being a United Nations Ambassador of Peace.

For seven decades, the children of Kashmir have grown up amidst violence.

After her silence over the matter, she has finally taken to Twitter to express her sentiments for Kashmiris. Here’s what she tweeted:

The people of Kashmir have lived in conflict since I was a child, since my mother and father were children, since my grandparents were young.

Highlighting the atrocities faced by the troubled people of the Himalayan region, she said:

The people of Kashmir have lived in conflict since I was a child, since my mother and father were children, since my grandparents were young.

Answering why she cares for Kashmir, she said that she shares her home ‘South Asia’ with 1.8 billion people including Kashmiris.

She reiterated that we need to live in peace and that she is ‘worried about the safety of Kashmiri children and women’ who are ‘most vulnerable to violence and most likely to suffer losses in conflict’.

As expected, the responses to her tweet were flooded with hate comments by war-mongering Indians, despite the fact that she didn’t even mention India once in her statement.

Pakistanis, on the other hand, are bashing her for not calling out India directly for the sinister atrocities being committed against the innocent Kashmiris, whose voices have been blocked by internet and media blackout in the region.