15th August observed as black day throughout the country 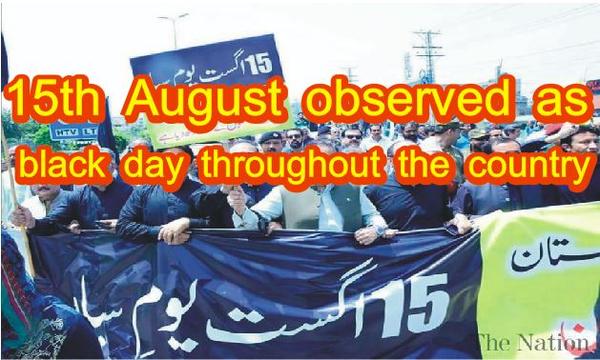 Protest rallies were taken out today on Thursday across the country to observe Indian Independence Day as Black Day and express solidarity with the Kashmiris. In Punjab, various rallies were taken out in this regard in which participants carrying flags of Pakistan and Kashmir and holding banners and placards inscribed with the slogans in favor of freedom struggle of Indian held Kashmiri. In Multan, a procession was taken out by the staff of Nishter hospital in which the protestors wore chains to protest against the Indian atrocities against Kashmiris.

A big rally arranged by district administration Multan was taken out from the residence of Chief Whip in National Assembly Malik Muhammad Aamir Dogar which culminated at Chowk Ghanta Ghar. In Sindh, provincial government also chalked out several programs including rallies to demonstrate solidarity with the Kashmiri people on Indian Independence Day as the Black Day. In Khyber Pukhtunkhaw, a rally was taken out in Parachinar, the headquarters of Kurram district today.

Addressing the rally, the speakers asked the United Nations and other international organizations to put pressure on India to stop massive human rights violations in the occupied territory. In Balochistan, Black flags have been hoisted at almost all the government, public buildings and vehicles while the people tied black ribbons on their arms. In Muzaffarabad, a rally was also taken out to observe Indian Independence Day as Black Day.