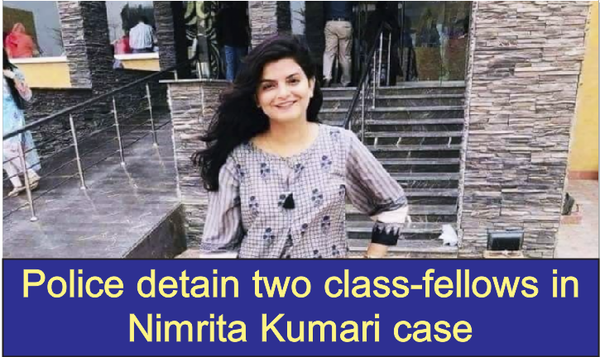 Sindh police on Thursday arrests two students in relation to the mysterious death of Nimrita Kumari, a final-year BDS student in Larkana, who died of apparent suicide at her university hostel on Monday.  SSP Larkana Masood Bangash told the media that two students were taken into custody after tracing the call data from the deceased student’s cell phone.

A host of pictures and other material, including exam passes, were found from Nimrita's hostel room. The laptop of Kumari also being analyzed for possible evidence and clues, according to police officials.  Earlier this week, Nimrita Kumari was found dead with injury marks on her neck in her hostel room of the Bibi Aseefa Dental College in Larkana, leading to protests in several parts of the province.

Her family suspected Kumari was murdered, while a post mortem report failed to come up with any conclusive findings. The university authorities had initially termed the death suicide.   The Sindh government had on Wednesday requested the Larkana sessions court to conduct a judicial probe into the student’s death after pressure from civil society members across the province.

Meanwhile, members of the Hindu community, civil society and political parties have also demanded the formation of a joint investigation team to hold a probe into Nimrita’s death.  Protesters held rallies in Larkana yesterday and marched towards the press club and raised slogans against the dental college administration and demanded justice. Demonstrations were held in Karachi too.