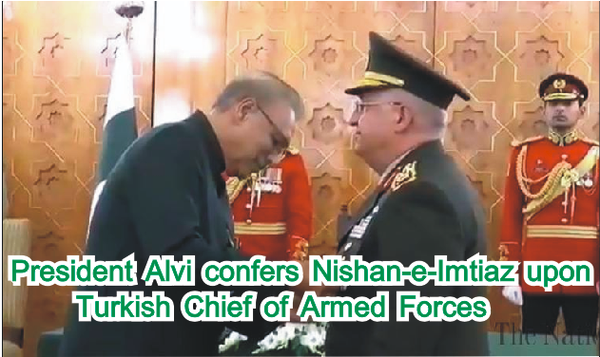 President Arif Alvi on Wednesday conferred the Nishan-e-Imtiaz (Military) upon Turkish Chief of Armed Forces General Yasar Güler at a special investiture ceremony at the Aiwan-e-Sadr in Islamabad. On the occasion, the president said that the unparalleled fraternal relationship between Pakistan and Turkey has now transformed into a strong strategic partnership over the years and is growing stronger. He said that the English TV channel to be collaboratively launched by Pakistan, Turkey, and Malaysia would go a long way toward combating Islamophobia on an international level.

The president said that Pakistan and Turkey had supported each other in difficult times and appreciated the Turkish support on the occupied Kashmir issue, particularly at the United Nations.  He reiterated concerns about Indian atrocities perpetrated on innocent Kashmiris and said that the international community should play a positive role to resolve the issue.

He stressed that there is a vast potential for investment in Pakistan especially in energy, infrastructure and food processing sector. He said Turkish investments have considerably grown, however, more needed to be done to realize the full bilateral trade potential.General Yasar Guler said that Turkey fully supported Pakistan on Kashmir issue and expressed hope that India and Pakistan would resolve the issue in accordance with UN resolutions.