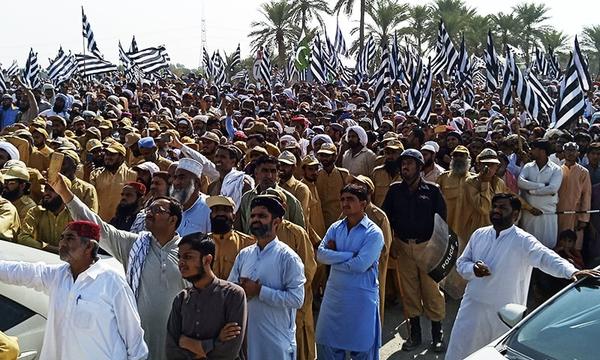 Earlier today, JUI-F chief Maulana Fazlur Rehman while addressing the marchers had said: "The war has been announced and now [the party] cannot retreat. We are moving forward with full confidence. We have to protect the Constitution, democracy and Pakistan because the incumbent government has put the survival of the country at risk."

"The Constitution has been made a joke in this country," he said, alleging that the prime minister has become a security risk. "He [Prime Minister Imran] has ruined the economy, and a country with a devastated economy can't survive. We approached the masses against him and took out 15 million marches and now we are able to help the people get rid of the government," the JUI-F chief said.

Rehman said that the government is restricting the media.

"When the fake prime minister talks to media, he says that he didn't impose any restriction. He should tell the nation under whose supervision the Pakistan Media Regulatory Authority (Pemra), which has issued a letter restricting TV anchors, works."

The so-called Azadi March had set out on Sunday afternoon from Karachi's Sohrab Goth area towards Islamabad. Thousands of people, including seminary students, are participating in the march. In addition, convoys of political parties including the PPP, PML-N, Awami National Party (ANP) and others are also part of the march.

The marchers, who spent the night in Sukkur on Sunday, are scheduled to enter Islamabad on October 31.

During the journey to Sukkur they passed through many towns and cities of Sindh including Hyderabad, Sakrand, Nawabshah and Sanghar. However, there was a sudden change in the itinerary of JUI-F chief Rehman — who led the marchers from Karachi to Hyderabad — and instead of moving towards Sukkur with the marchers, he went to Larkana.

Before the marchers began their journey from Karachi, leaders of the opposition parties supporting the anti-government march addressed them from a stage set up on a container.

They all called for the resignation of Prime Minister Imran and the holding of fresh elections in the country.

Rehman in his speech criticised the policies of the Pakistan Tehreek-i-Insaf (PTI) government and said that he would not budge from his demand for the prime minister’s resignation. He said he would announce an important decision after the march reached Islamabad.

He said his party hadn't accepted the PTI government as legitimate, terming it a product of a rigged election.

He said the Azadi March would remain within the parameters of the laws of the land.