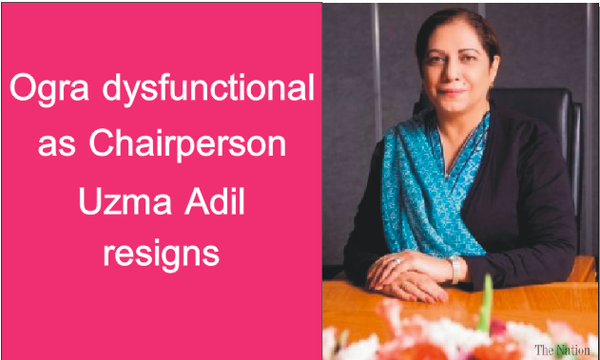 The Oil and Gas Regulatory Authority (Ogra) has become functional after its chairperson retired on Friday. Chairperson Uzma Adil was appointed by former prime minister Nawaz Sharif as Ogra chief in 2016 for four years. After her retirement, the Ogra quorum is now incomplete. Chairman and three members run the Authority. Presence of three of these four members is a must for handling regulatory affairs and the decision-making process. The post of Ogra’s Member Oil is already vacant and now after the departure of the chairperson, the Authority is left with only two members: Member Finance and Member Gas.

Member Finance Noor ul Haq is also the Vice Chairman of the Ogra. Due to the incomplete quorum, the authority can now only see the day-to-day work.Uzma Adil, who was a chartered accountant by profession, joined the Ogra as first-ever lady chairperson in 2016 and took very bold steps in regulating the oil and gas sectors. Prior to joining Ogra, she was CFO (Chief Financial Officer) in Sui Northern Gas Pipelines Limited. Uzma Adil joined the Ogra on July 18, 2016 when the mighty oil marketing companies (OMC's) were not inclined to implement oil rules and it was an uphill task to get them implemented, but she tactfully succeeded in implementing the said rules.

Uzma Adil also played a key role in increasing the storage capacity of petrol by up to 30 days and for diesel by up to 50-70 days. During her four-year tenure, she refused to issue the oil marketing licences to OMC's directly rather she forced the applicants seeking marketing licences to first acquire construction licence to build the fuel storages and then get it examined by third party if the storages are found up to the mark and then Ogra under her leadership issued the marketing licence to OMC's. Uzma Adil was also facing NAB investigation on her appointment as Ogra chairperson and on approval of LNG contract. She said in her statement submitted to the NAB that she got selected through a transparent manner in a competitive environment.