Why oil prices went negative and why it doesn't really matter 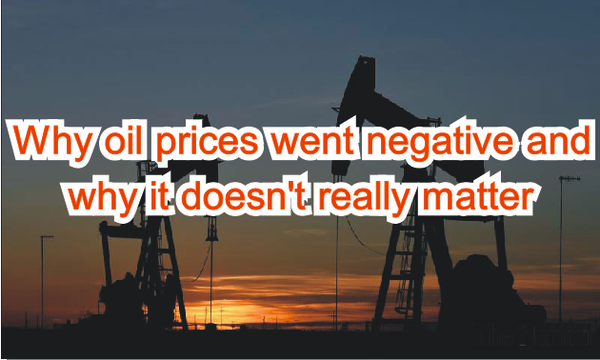 As the coronavirus pandemic and the lockdowns caused by it continue to push global oil prices down to record lows, the start of oil production cuts negotiated by OPEC+ remains just about the only hope to halt falling prices. The prices for next month's futures of American light sweet oil mixture WTI set a new record on 20 April plunging from almost $18 per barrel all the way down to zero and crossing into negative territory, something that many financial experts previously thought impossible. Such a historic drop even led to suggestions that oil producers might start paying their customers to take the oil they produced. While it is in the financial interests of oil companies to sell the their commodity, even paying for it rather than stopping drilling operations, this scenario might not necessarily materialise.

Hot Potato on the Oil Market

The historic drop in the oil futures market mainly concerned WTI futures for May but left most other mixtures relatively unscathed despite all of them ending up lower. WTI was dealing with several factors that day that apparently led to such a drastic nosedive. The 20th of April was the day when most oil futures contracts for May were set to expire. These contracts often involve a cash settlement, a payout or payment that an investor receives or pays depending on how a contract's price has changed since it was released or bought. But most WTI futures involved a physical delivery instead, meaning that an investor, holding the contract on expiration day receives the corresponding amount of barrels of real crude in a designated area - at an oil terminal in Cushing, Oklahoma in the case of WTI.

Naturally, few investors really wanted to end up with thousands of barrels of oil that now carries little demand, with oil storage facilities threatening to be filled in a matter of weeks. This apparently resulted in investors putting their futures contracts up for sale on the last day and almost no one wanted them. In a desperate attempt to sell the unwanted contracts traders first dropped the price to $0.01 and then the bottom fell out, promising to pay up to almost $40 dollars per barrel to anyone, who would take them. According to market information, there was only a handful, who agreed to take such an offer.

The first reports by the agency Refinitiv suggested that not only WTI futures went negative, but also spot on sale prices for such blends as Brent and Urals, minus $3.5 and minus $3 respectively. However, the company later withdrew those reports calling them faulty. According to the agency Argus, the prices for these two blends never fell below $17 per barrel. WTI futures for June performed relatively well on 20 April despite the steep fall of the May futures. Yet, the very next day, June futures also dropped from $21 to $7, rallying back to $10 per barrel around 18:35 GMT on 21 April, while spot prices remained at around $7.27.

This doesn't necessarily mean that the next WTI futures will face the same fate. Starting 1 May members of the new OPEC+ deal will start cutting their oil output to reduced the current glut, meaning there will be less oversupply to drive market prices down and that oil storage might not happen after all.  Additionally, numerous nations have started considering a cautious restoration of business and gradual lifting of lockdowns in the hope that the coronavirus pandemic has passed its peak. This, along with the ongoing restoration of the Chinese economy might boost petroleum consumption and thus prices for oil.