'One of the greatest leg spinners of all time': PM Imran pays tribute to deceased Abdul Qadir 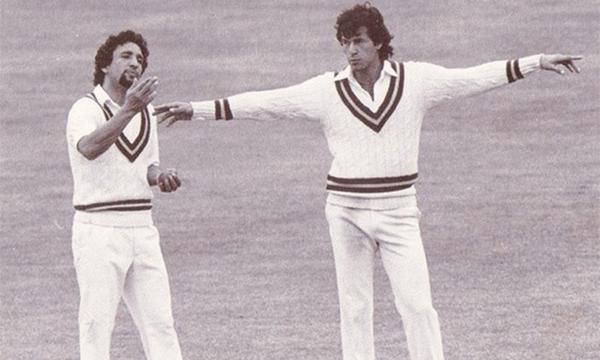 Prime Minister Imran Khan on Saturday paid rich tribute to legendary wrist-spinner Abdul Qadir — who died of cardiac arrest a day earlier — terming him a "genius" and one of the greatest leg spinners of all time.

Taking to Twitter, the premier said he was deeply saddened to hear of the former leg-spin maestro's demise, and sent out his prayers and condolences to the deceased's family.

"Abdul Qadir was a genius, one of the greatest leg spinners of all time," Prime Minister Imran wrote of his former teammate, adding that Qadir was the "life of the dressing room" who used to entertain the players with his wit and humour.

Likening him to legendary Australian spinner Shane Warne, 1992 World Cup-winning captain said Qadir's bowling statistics would have been different had he been playing the sport in the current age with the modern Decision Review System (DRS).

"Qadir's bowling statistics do not do justice to his genius. Had he been playing cricket now with the modern DRS system, where batsmen can be given out on the front foot as well, Qadir would have gotten as many wickets as the great Shane Warne."

Warne himself expressed grief at Qadir's death, terming him a "terrific bowler" of his time.

"I had the opportunity to meet him in 1994 on my first tour to Pakistan. I think a lot of people who bowled leg-spin, like I did, he was the guy who we looked up to in the eighties. He was the main leg-spinner in that era," he told Sky Sports.

"He was a terrific bowler who bamboozled a lot of batsmen. His record is a terrific one."

Abdul Qadir brought the art of right-arm leg spin back to life after it had gone out of fashion during the early eighties. He kept the torch alight for a generation of leg spinners to come, among them a man no less than Warne, who himself went on to become a leg-spin wizard. Warne took time out to visit him at his home in Lahore after being advised to do so by his captain Steve Waugh during their tour of Pakistan in 1998-99.

Qadir made his Test debut in 1977 against England at Lahore and retired from international cricket in 1993,

He had a peculiar run-up, bounding in to the crease and making a jump before releasing the ball. The variety of his deliveries was phenomenal: there was the orthodox leg-break, the top spinner, googly and the flipper. His vociferous appeals endeared him to spectators, but sometimes got him into trouble with umpires.

Skipper Imran Khan used to make no secret of his liking for Qadir. After he was named captain for the 1982 England tour, Imran showed his faith and expectations by describing the leg spinner as “our trump card”.

Qadir repaid Imran’s trust as his six scalps in the second Test at Lord’s played a major role in what was then his country’s only second victory on English soil.

His memorable Test series was against England in Pakistan in 1987-88. He dismissed nine batsmen for a measly 56 runs in the first innings of the first Test at Lahore and returned match figures of 13 for 101. Altogether he took 30 wickets in the three-match series.

Qadir made his one-day debut at the 1983 World Cup in England and took no time in silencing his detractors who based their opposition to his selection on an age-old belief that leg spinners are generous in giving away runs.

After retirement from international cricket, Qadir turned into an uncompromising critic of the Pakistan Cricket Board (PCB).

He joined the PCB as chief selector in 2009 when Ijaz Butt was at the helm. He selected the Pakistan team for the T20 World Cup that year, but quit during the mega event after Pakistan made an inauspicious start, even though they went on to lift the trophy.