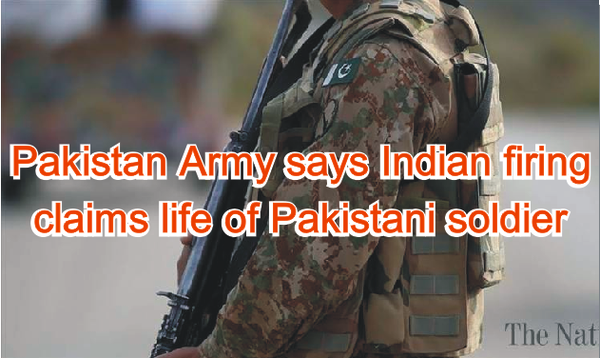 Pakistan army said on Tuesday that one of its soldiers was killed in Indian forces' firing along the Line of Control (LoC) in the Kashmir region. An army statement said the Indian troops "resorted to unprovoked fire" in Shahkot sector along the LoC with heavy weapons. Pakistan's army responded effectively and "inflicted heavy losses on enemy in terms of men and material," the army's media wing Inter-Services Public Relations said.

The statement said during the exchange of fire, a 20-year-old soldier was killed. Pakistan and India had declared a ceasefire along the LoC, the de facto border between both countries in the disputed Kashmir region. However, both sides have routinely exchanged fire and accused each other of ceasefire violations. Tension has been heightened after India lifted the special status for the Indian-occupied Kashmir in August last year. Pakistan downgraded its diplomatic relations, suspended trade relations and train service with India in response.