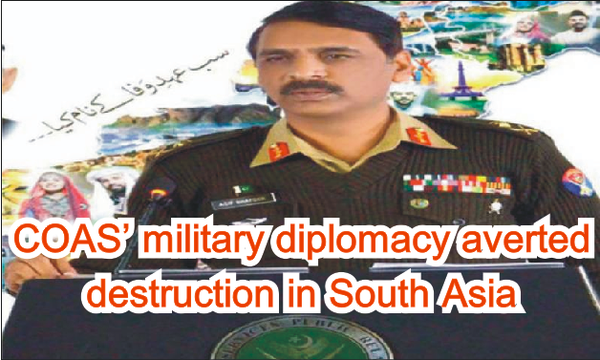 ISLAMABAD - Paying tributes to the leadership of Chief of Army Staff General Qamar Javed Bajwa, military’s chief spokesperson Maj Gen Asif Ghafoor on Thursday said the army chief had averted any major conflict in the region with his strategic prudence and superior military strategy. Maj Gen Asif Ghafoor made these remarks while talking to defence correspondents a day ahead of relinquishing his charge as Director General of Inter Services Public Relations (ISPR). He said that historic measures as well as important and difficult decisions taken by the army chief had led to peace in the country.

He noted that the army chief had spearheaded the successful Operation Radd-ul-Fasaad following the Operation Sherdil and Operation Zarb-e-Azb which was crucial to securing lasting peace in the country and also helped carrying out crucial madressah reforms to bring about religious tolerance in the Pakistani society. Highlighting the significance of the “Bajwa Doctrine”, Maj Gen Ghafoor said it is about bringing peace to the country and the region without compromising national security, adding that Gen. Bajwa’s “military diplomacy” had exalted Pakistan’s standing among the nations of the world.

Commenting on Indian Prime Minister Modi’s recent remarks that the Indian army is capable to make Pakistan “bite the dust” in a short span of seven to ten days, the military’s chief spokesperson said that the Pakistan Army will always be surprising the Indian armed forces. He noted that the Indian army couldn’t defeat 800,000 people of the occupied Jammu and Kashmir, how will you defeat a united Pakistani nation of 220 million people? he asked. Warning India against any misadventure, Maj Gen Ghafoor said there was “no victory in war; humanity always loses”.

“We will give a befitting response if war is imposed upon us. We have said this before, and I am saying it again: You may start a war, but we will be the ones to end it”, he added. Maj Gen Asif Ghafoor said that Pakistan’s civil and military leadership wanted durable peace in the region, so the Indian civil and military leadership should also think of importance of peace and asked the Indian armed forces to halt their oppression against people in the occupied Jammu and Kashmir.

Taking his jibe at Indians’ happiness over the completion of his tenure and his exit as Director General Inter Services Public Relations (ISPR), Maj Gen Asif Ghafoor said it is an ‘honour’ for him. He paid his glowing tribute to the national media and Pakistani youth using social media platforms for their support to the armed forces throughout his tenure.  He said that Pakistan was proud of its intelligence agencies and paid tribute to the spy agency for maintaining peace in the country and thwarting terrorism.

He said that the nation owes a lot to the country’s intelligence agencies. “ISI is among the most well recognised intelligence agencies in the world,” he added. Maj Gen Asif Ghafoor also spoke about the role of the DG ISPR, saying that he could not deviate from the military’s policy. “A military spokesperson can’t say anything against the institution’s policy. As a spokesperson, word you say is not your personal opinion,” he concluded. Maj Gen Ghafoor has been posted as the General Officer Commanding Okara and the new Director General of the ISPR, Maj Gen Babar Iftikhar will take his charge soon.