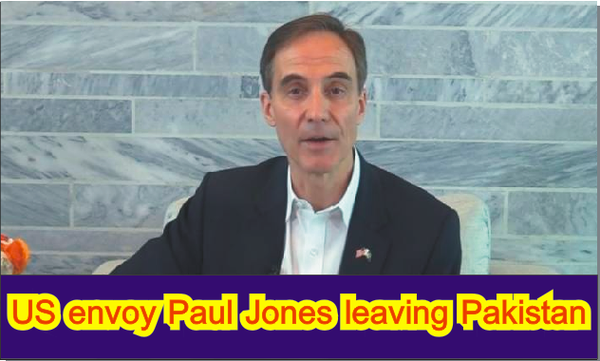 Ambassador Paul Jones Charge D Affaires of embassy of United States of America has completed his term and leaving Pakistan. Ambassador Paul Jones stayed in Pakistan for about two years. During his tenure he tried his best to put bilateral relations back on track. Ambassador Jones stepped into shoes of his predecessor Ambassador David Hale. USA did not appointed full fledge ambassador after departure of Ambassador Hale. Analysts believe, Pakistan-USA ties have not been on a positive trajectory for quite some time.

As per diplomatic norms and principle of reciprocity, the USA was required to send a full ambassador to Pakistan however it preferred to run the mission with a Charge d Affaires. It was for the first time during past few decades that the US did not appoint an ambassador to Pakistan. Unlike, Pakistan always chose to run its US mission with a fully empowered ambassador. The US ostensibly is not happy with Pakistan for latter’s close ties with China. Likewise, Afghanistan is yet another issue that seeks to divide bilateral opinion.