Pakistan Army has killed over 60 Indian soldiers at LoC since Feb 27: Asif Ghafoor 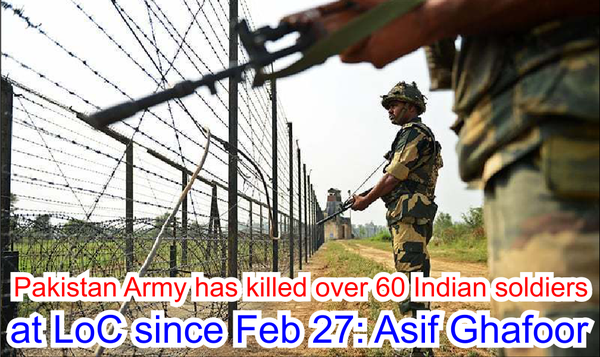 The Pakistan Army has killed more than 60 Indian soldiers during firing at the Line of Control (LoC) since February 27, Maj Gen Asif Ghafoor, the director general of the Inter-Services Public Relations (ISPR), said on Saturday.

On February 27, the Pakistan Air Force (PAF) had shot down two Indian aircraft which had violated Pakistani airspace. An Indian pilot was also arrested but he was later released by Pakistan as a goodwill gesture.

Tweeting from his personal account, Ghafoor said many Indian troops were also injured and their bunkers destroyed by Pakistani forces since the February tit-for-tat airstrikes.

The head of the army's media wing noted that since February the PAF had downed two Indian Air Force jets, two Indian helicopters had "met fratricide under fear" and the Indian navy was "under deterrence".

On Friday, the ISPR had said that Indian army chief Bipin Rawat with "irresponsible statements" and "blood of innocents on his hand" seeks to become India's first Chief of Defence Staff (CDS).

CDS is a proposed position for the combined head of the Indian army, Indian air force and Indian navy. The creation of the post was announced by Indian Prime Minister Narendra Modi in his independence day speech in August.

'Rogue force'
The ISPR had accused Gen Rawat of converting the Indian army into a “rogue force” and wasting lives of his men because of his reckless command and for the attainment of personal ambitions.

The tweets came in response to Gen Rawat’s latest comments at a lecture in which he alleged that Azad Kashmir and Gilgit-Baltistan were controlled by “terrorists”.

The Indian army chief’s statement came days after Pakistan exposed his claims of having neutralised three “terror launch pads” in Azad Kashmir in heavy artillery strikes in the early hours of Sunday. The Foreign Office and Army later took a group of 23 foreign diplomats and media to the areas hit by Indian shelling to show that India had actually targeted civilian population instead of the claimed “terror launch pads”.

Indian High Commission representatives had been invited to the trip, but they stayed away.

Moreover, Indian authorities did not even provide the coordinates of the terrorist targets they claim to have destroyed.

The Indian army chief has made a number of careless statements on Pakistan in the past also, which served to escalate tensions between the two countries.

Tensions between the nuclear-armed rivals that got engaged in a military stand-off in February have remained high this year, but spiked sharply after India revoked occupied Kashmir's autonomy on August 5.