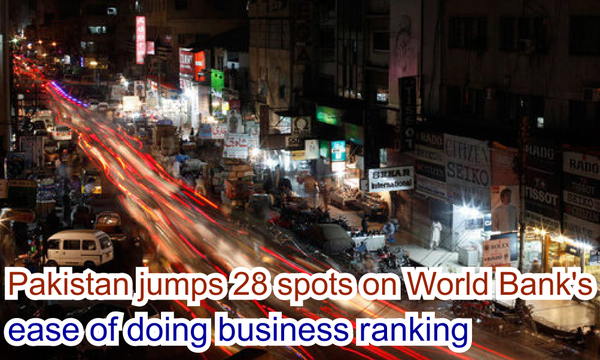 Pakistan landed among the world's top 10 business climate improvers for its ratification of six regulatory reforms pertaining to business regulation, the Doing Business 2020 study by the World Bank said.

A statement issued on Thursday highlighted Pakistan's efforts in bringing improvements to the business climate in the country, which earned it a jump by 28 places to a global ranking of 108. The previous year Pakistan had stood at 136.

“This rise is significant and made possible by collective and coordinated actions of Federal Government and Provincial Governments of Sindh and Punjab over the past year,” said Illango Patchamuthu, World Bank Country Director for Pakistan. “The accelerated reform agenda has many noteworthy features to improve quality of regulations, reduce time and streamline processes. This momentum needs to be sustained in the coming years for Pakistan to continue to make progress.”

The statement noted that the reforms that paved the way to Pakistan's new ranking are also "significant".

"The country has made starting a business easier by expanding the functionalities of the online one-stop-shop. This reduced the number of procedures required to set up a business from 10 to five and improved the economy’s score for starting a business. Additionally, in Lahore, the Labour Department registration fee was abolished," it said.

The World Bank statement also recognised that the process to acquire a construction permit was made easier by authorities and faster in both Karachi and Lahore.

In Karachi, the process was also made safer owing to building quality inspections which are regularly conducted.

"Pakistan also eased the process for paying taxes by introducing online payment modules for value added taxes and corporate income taxes. The government also lowered the corporate income tax rate for the 2018 fiscal year. This reform reduced the number of payments from 47 to 34 and the total number of hours required to comply with tax requirements per year from 294 to 283," according to the statement.

Regarding electricity subscriptions, the World Bank observed that the process had been made much easier.

Similarly, the process of registering property had also been made more efficient "by making it easier to execute and register a deed at the Office of the Sub-Registrar".

"Lahore increased the transparency of the land administration system by publishing its fee schedule online," said the statement.

"Pakistan enhanced the integration of various agencies in the Web-Based One Customs (WEBOC) electronic system and ensured coordination of joint physical inspections at the port," the World Bank noted in its study.

"Pakistan continues to perform best on the protecting minority investors indicator, earning the maximum possible points on the extent of ownership and control index, which measures governance safeguards protecting shareholders from undue board control. Globally, Pakistan is in the top 30 economies on this measure," said the statement.

However, despite the significant progress, there are certain areas which need to be worked on.

"For example, on enforcing contracts, the country ranks 156th. It takes 1,071 days to resolve a commercial dispute in Pakistan, almost twice the average among OCED high-income economies," the World Bank study found.

Gulf countries led by Saudi Arabia sharply improved their rankings in the World Bank's latest Doing Business report, while Latin American countries largely lagged in reforms and New Zealand took the top spot for the fourth year in a row.

The report found that the most improved countries over the previous year were Saudi Arabia, Jordan, Togo, Bahrain, Tajikistan, Pakistan, Kuwait, China, India and Nigeria.

It said Saudi Arabia's reforms included establishing a one-stop shop for business registration, introducing a secured transactions law and an insolvency law, improving protections for minority investors, and measures to bring more women into the workforce.

“Something clearly is happening in the Gulf which has not happened before,” Simeon Djankov, World Bank senior research director and founder of the Doing Business report, told Reuters ahead of a launch event in Riyadh attended by ministers.

“Everybody here in this region figured out we better diversify the economy in some direction and I think this is actually why the reforms are happening now.” Two to three years ago when countries started work on some of these reforms, oil prices were unstable, he added.

Saudi Minister of Commerce and Investment Majid al-Qasabi said the ranking bump was “a good milestone. But this has to be sustainable. This is a journey (which) requires continuous efforts.”

The report coincides with the scheduled appearance next week of World Bank President David Malpass at a Saudi investment conference, a year after his predecessor pulled out of the same event amid a global outcry over the murder of journalist Jamal Khashoggi in Saudi Arabia's Istanbul consulate.

US officials said that after cancelling last year, Treasury Secretary Steven Mnuchin and presidential adviser Jared Kushner would also attend the forum, which aims to showcase Saudi Arabia as a business destination.

“Removing barriers facing entrepreneurs generates better jobs, more tax revenues, and higher incomes, all of which are necessary to reduce poverty and raise living standards,” Malpass said in a statement.

Critics say the report is too heavily weighted in favour of deregulation.

“This is a pure measure of deregulation. This index takes a fairly extreme position on market fundamentalism,” said Justin Sandefur, a fellow at the Washington-based Center for Global Development.

Chile fell three places to 59th. The South American commodity exporter was at the center of a controversy in January 2018 over changes to the study's methodologies, which former World Bank chief economist Paul Romer said may have been biased against socialist then-president, Michelle Bachelet.

Romer left the bank shortly after airing his views in a Wall Street Journal interview.

“India put in place four new business reforms during the past year and earned a place in among the worlds top ten improvers for the third consecutive year, the World Bank said in its "Doing Business 2020” report.

Yet, the economy has slowed over the past year as weak private investments led to year-on-year growth falling to a six-year low of 5 per cent in the April-June quarter.

The latest report showed India still lagged in areas such as enforcing contracts where it was ranked 163rd, and registering property where it was 154th.