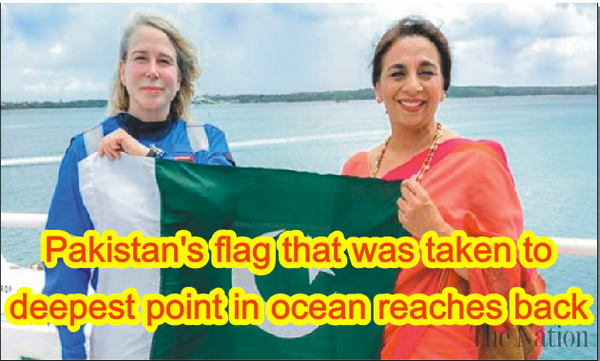 Pakistan’s Flag that was taken to the deepest point in the ocean, Challenger Deep, has reached back to the Pakistan High Commission London. On High Commissioner Mohammad Nafees Zakaria’s suggestion, a distinguished Pakistani British lady Durdana Ansari OBE Hon. Cdr Royal Navy took the flag to the Mariana Trench in the ocean as part of an expedition team.

Vanessa O’Brien a famous American British mountaineer who has scaled both highest peaks, i.e. Everest and K-2, was a lead figure in the team. Durdana, who was invited to share the details, passionately made an illustrated presentation on the expedition. Cherishing the experience and exposure to the sea as well as team work spirit she learnt during the expedition, Durdana paid tributes to Vanessa O’Brien.

She expressed her happiness of meeting Dr Cathy Sullivan, another celebrity - first woman astronaut to walk in space, and Victor Vescovo, the submersible pilot, for making the trip memorable, and admired their interest in Pakistan and admired them. Challenger Deep is 10,925 meters, in the Mariana Trench. If Everest were put in the Mariana Trench, it would still be 2 km under water. During this descent Vanessa became the first woman to reach Earth’s highest and lowest points, a Guinness World Record.

In his remarks on the occasion, the High Commissioner praised Durdana Ansari for her commitment and love for Pakistan. He said Pakistan is proud of its citizens like Durdana who always keep its flag high. The High Commissioner expressed his gratitude to Vanessa O’Brien for her sincere efforts to project Pakistan in the world positively.

He also expressed his thanks to Dr Cathy Sullivan and Victor Vescovo for their expression of sentiments towards Pakistan. Mr Zakaria availed of the opportunity to congratulate the entire expedition team on their successful mission to the Challenger Deep. The primary purpose of exploring Challenger Deep is to map the eastern seabed, collect water and rock samples, and to take scientific measurements.